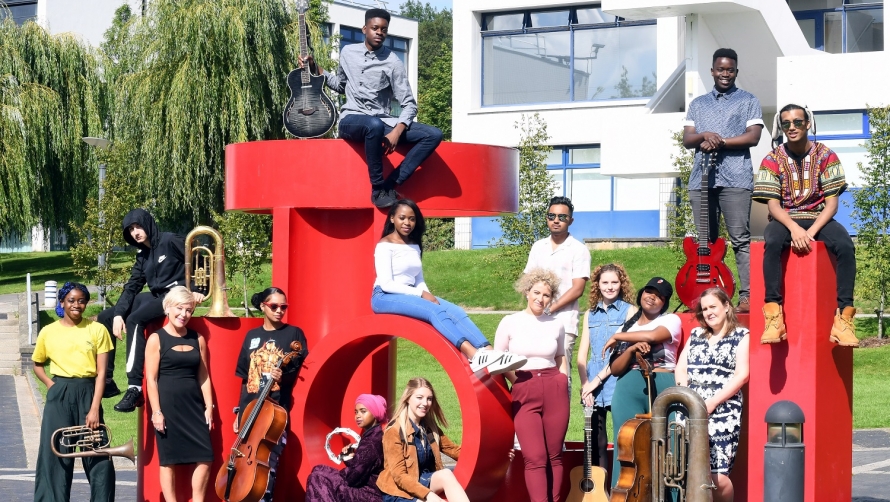 A group of 12 young musicians from Coventry are set to showcase their incredible talent thanks to an ambitious and exciting project through the city’s bid to be UK City of Culture.

The group – aged between 16 and 21 – have all come through Positive Youth Foundation’s Changing Trax project, which offers music as a platform to allow them to express themselves.

They are now collaborating with classical musicians from Armonico Consort to produce a stirring, professional performance at Warwick Arts Centre in November.

Changing Trax – Electric Proms will see the young people perform seven original tracks with the orchestra and youth choir – from country to hip hop – as well as four cover songs.

Coventry City of Culture Trust, through its events sponsors Adient, Jaguar Land Rover, CEF, Coventry and Warwickshire Chamber of Commerce, Coventry Building Society and Friargate, have made a significant contribution to the project which the Heart of England Community Foundation, a regional grant-giving organisation, have match-funded.

Rehearsals are already underway, with the young people being guided by former BBC Proms Young Composer of the Year Toby Young, composer-in-residence for Armonico Consort.

Susie Murphy, of Positive Youth Foundation, said: “This is a life-changing project for the young people who are involved. We asked them what would be the ultimate achievement for them musically – some said getting a record deal, one said performing with Jay-Z. Another talked about the time that Dizzee Rascal collaborated with an orchestra and how that brought a new dimension to his work.The group agreed that this would bring a sense of credibility and a show of approval for their music and got very excited at the prospect but, of course, it’s quite costly to put this kind of show together. At Positive Youth Foundation, we strive to provide young people with access to the highest quality opportunities. So now that this is happening through the support of the Coventry City of Culture Trust, their event sponsors and the Heart of England Community Foundation, it will genuinely make this young group of musician’s dreams come true. But this is not just a community project – it’s going to be the real deal, a professionally put together performance that shows off the unbelievable talent of this group of young Coventry people. The original pieces have been created by the young people themselves over the past seven years through their determination, hard work and passion. It is going to be wonderful and a real example of what Coventry is all about.”

The performance will take place on Wednesday, November 1 and tickets are available now.

Armonico Consort is a nationally-acclaimed choir and instrumental ensemble based in Warwick. It entertains and wows audiences across the country with concerts, recordings and innovative projects.

Christopher Monks, Artistic Director of Armonico Consort, said: “We were thrilled to be invited to be part of this superb project which perfectly matches our belief that music has the power to change lives.
“We’re really looking forward to working with the young people at Positive Youth Foundation to support them in achieving the highest quality professional performance together with over 30 musicians and 200 young singers from AC Academy Coventry.”

Laura McMillan, Manager of Coventry City of Culture Trust, said: “This is a hugely exciting project for the city. Coventry is a city that is, on average, seven years younger than the rest of the UK and we wanted to reflect that in our bid and in the events we’ve held during the bidding process. The Changing Trax – Electric Proms project has given some amazingly talented young people the chance to use music as a way of expressing themselves and this will take that to another level, thanks to the support from our bid event sponsors. We can’t wait!”

Tina Costello, CEO of the Heart of England Community Foundation, said: “We are big supporters of Coventry’s bid to be UK City of Culture, especially where grassroots, community groups are benefiting and getting involved. We work with Positive Youth Foundation on a regular basis too and this is a truly collaborative project which will have an amazing end result.”