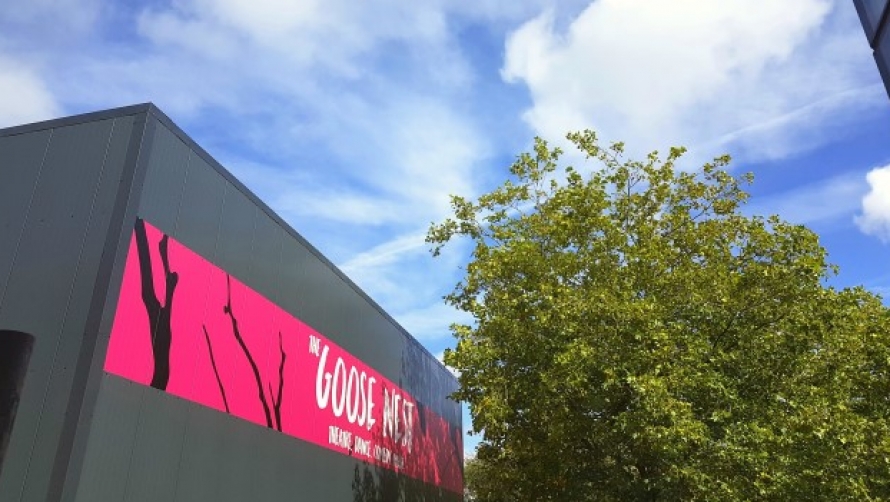 Bite Size Festival officially opened the building on Saturday 7th October with a diverse and exhilarating collection of shows from both well-established and emerging companies. Last night, Tue 10 October, the programme continued with the charming, funny and beautifully crafted Factory Girls.

The new 296 seater auditorium will be open for nine months, until June 2018, whilst Warwick Arts Centre’s Theatre and Studio spaces are refreshed and renovated as part of the venue’s 20:20 project. The three year development will see the venue go through some major changes and improvements to the building, parts of which date back to 1974.

Throughout the next nine months, The Goose Nest will be a hub for both professional and student–lead performance. The Autumn season will see comedians including Danny Bhoy and Phill Jupitus; theatre and dance productions including Rita, Sue and Bob Too, We’re Going on a Bear Hunt and Leviathan; and students shows from the_ Drama Collective Festival_ and Warwick University Drama Society (WUDS) take to The Goose Nest stage.

Warwick Arts Centre’s Director of Planning and Operations, Andrea Pulford said: “Opening a new venue, at the start of term, at the beginning of a season programme as well as coordinating the temporary closure of one side of the building is no mean feat – but we don’t like to do things by halves at Warwick Arts Centre! We have worked at break neck speed to get The Goose Nest ready for opening and our technical and front of house teams have not stopped. The redevelopment is much needed, but during this time we didn’t want to compromise on the programme for our audiences, or the performance spaces for our professional and student companies, so we are aiming for ‘business as usual’ with The Goose Nest helping us with this commitment. It’s going to be an exciting few years at Warwick Arts Centre and we are looking forward to the journey as much as reaching the final destination with a bigger, better building in which to programme the best art, theatre, music, comedy, dance, circus and film.”

The Goose Nest name was chosen by University of Warwick students through a vote hosted by the university’s Student Union. Warwick Arts Centre will remain open throughout the 3 year 20:20 project and a full programme of events will continue throughout the building. The Theatre and Studio spaces will re-open in June 2018 and a second phase of redevelopment will begin in October 2018. For further news and information, please visit