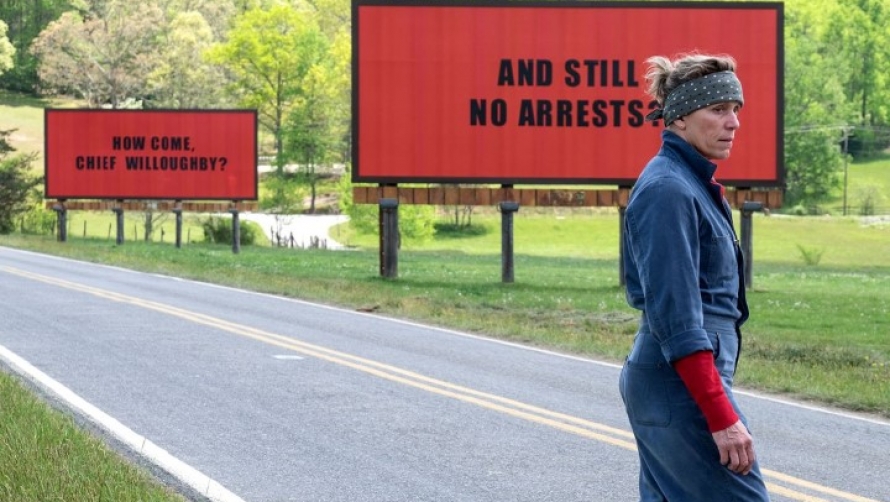 Frances McDormand leads a stellar cast as Mildred Hayes, a mother whose patience with the local authorities has worn thin, as her daughter’s killer has not been brought to justice. In a bid to get their attention, Mildred pays for three billboards to challenge the police on why no arrests have been made. The plot that unfolds is story-telling at its best with an Oscar nomination for Best Original Screenplay as its reward. The context of the story is anything but funny with heavy themes of murder, rape, domestic violence, arson and suicide. That being said, Three Billboards will have you crying with laughter by smart, quick and very dry dialogue. Mildred Hayes was quite literally written for McDormand whose trademark wit packs a punch.

McDormand is supported by Woody Harrelson and Sam Rockwell. Chief Willoughby is another prime example of Harrelson’s deserved resurgence in Hollywood and Dixon solidifies Rockwell as one of the finest character actors in the industry. Unusually, both are competing for Best Supporting Actor at this year’s Academy Awards. With Rockwell established as the front runner, he is likely to walk away with the golden statuette alongside McDormand for Best Actress.

Three Billboards’ strength lies in the richness of its supporting characters. Whilst McDormand, Harrelson and Rockwell drive the plot, its cast of supporting players enhance our impression of this small town and the residual tension left behind by this abominable crime. Superb editing and a strong score further contribute to this near-perfect cinema outing.

Arguably, it’s only drawback for some, could be its use of profanity but this never feels out of place. The use of strong language is credible to the motivations of the characters and whilst it contributes to the humour of the film it never feels like it is being used for cheap laughs. Martin McDonagh’s smart dialogue is a key to his success with previous critical acclaim garnered by In Bruges and Seven Psychopaths.

Despite being only six weeks into 2018, Three Billboards Outside Ebbing, Missouri is a strong contender for film of the year. Three Billboards could so easily have fallen by the way-side as another Indie film that is praised by those in the business but seen by very few. Thankfully, with word of mouth creating a buzz for this film and seven Oscar nominations under its belt, Martin McDonagh’s Three Billboards will be heralded as one of cinema’s finest dark comedies.