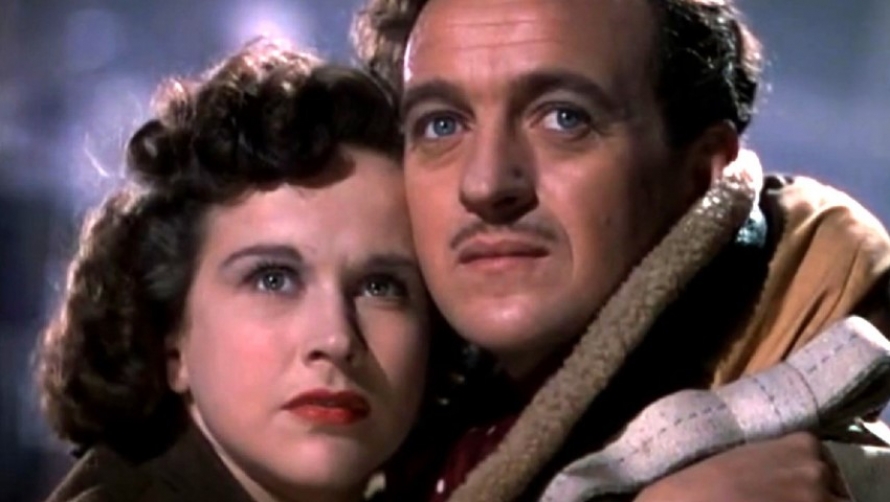 A Matter of Life and Death was made at the request of the British Ministry of Information in the 1940s, let’s just start with that. Originally, the idea was to use it as propaganda to stress the importance and necessity of goodwill between America and Britain.

This “mission” led to Michael Powell and Emeric Pressburger directing one of their best films. In this tale, British World War II pilot Peter D. Carter, played by David Niven, jumps out his flaming plane, without a parachute, but against all odds still manages to survive. As he was supposed to die, a messenger from the “other side” named Conductor 71 comes to pick him up and take him where he ought to be. Nevertheless, as Carter fell in love with an American radio operator after his inexplicable escape, he refuses to die and decides to appeal his case before a celestial court.

Surreal is the adequate word to describe the overall feel emanating from this feature. The extravagance and originality of the decors, the settings, is just one of the reasons why this picture stands out. The stairway to heaven especially is remarkable, in its dimensions and architecture.

The dialogues, and more specifically the words used by the characters, are chosen so to give them a certain wit and vivacity when they express themselves, which makes this experience all the more enjoyable.

It is safe to say that this film is a fantasy, as a genre, but also in the literate sense of the word. Seeing all these over the top and caricatural characters interacting and arguing, with this constant touch of absurdity, makes watching this picture all the more entertaining, and quite a singular experience. Strangely enough (or not), this bizarreness will make you, as a spectator, even more curious and attentive to the course of the action, drawing you even deeper into the story. And this is what gives range to this film.

Conductor 71 was the cherry on top. His allure and attire made me wonder whether he was the Mad Hatter’s French distant cousin. Both characters have this hallucinatory yet charming vibe, that is so dear to this film, as well as Alice in Wonderland.

I will leave you with this: If the law follows love, then is it truly reasonable?