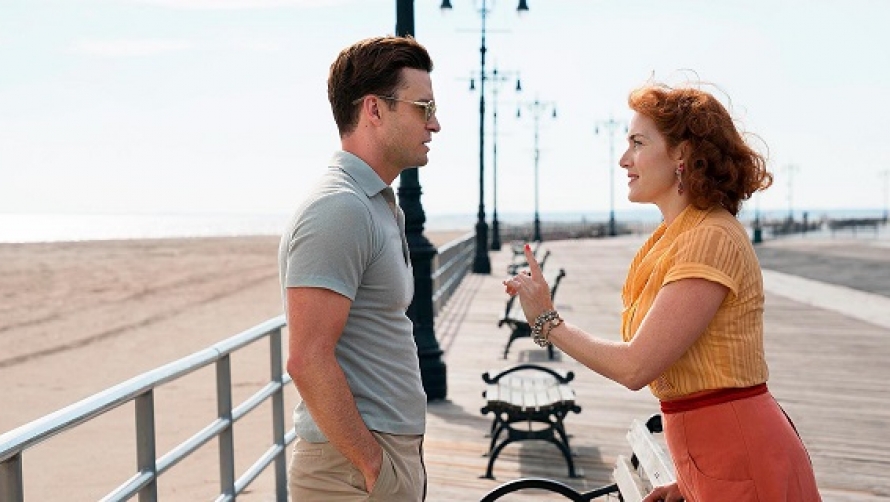 As we saw him do before, Woody Allen addresses the matter of transgression in this film.

The illusion that doing the forbidden will help better one’s reality, or at least help escape its burden. Yet, as it unfolds, the story proves that at best, it is a mirage, and at worst, a lure that can reveal itself to be deadly. This facet, this side of human behaviour, were previously represented and exacerbated in “Match Point”.

In Wonder Wheel, Woody Allen chose to inscribe the plot in a tragic frame, where its main characters are faced with decisions that could potentially have grave consequences. Here, the narrative is set in 1950s Coney Island, where a gnawed waitress in her late 30s (Kate Winslet) lives in fragile balance with her ex-alcoholic husband (James Belushi), a carousel operator, whose long-lost daughter Carolina (Juno Temple), now reappeared to seek refuge and escape gangsters. Mickey (Justin Timberlake), a lifeguard, is not only a desperate romantic, he’s also commentator of this story.

The dynamic of this crossroads is partly fuelled by the miasma of Ginny (the waitress), who lives in her own version of reality. Her façade of a responsible woman quickly fades to reveal a lost person, still hooked on her vanished dream of becoming a recognised actress. She is a failed artist, but refuses to admit it, turning her self-perception and more generally her life, into a lie. Ginny considers her role as wife and waitress an act, that she actually is an actress of certain importance. And to escape this unbearable truth about herself, she starts having an affair with Mickey, picturing for herself and her lover, a romance in which she would, at last, be able to live unrefrained by her environment and social context, feeling special, finally in the spotlight.

In the final scene, where she takes off on a hysterical monologue, Ginny can be likened to the character of Blanche Dubois in Tennessee Williams’ A Streetcar Named Desire. So much by her fragility that by the tacky clothes and jewellery she exhibits.

Mickey is also very much grounded in a fantasy world of his own. He believes that one day, perhaps, he will become a writer of the calibre of Eugene O’Neill. Even though it is pretty much clear that he most probably won’t. Their idyll will become endangered when the much younger Carolina crosses path with the lifeguard, therefore threatening Ginny’s escape. The physical environment, and especially its light, in which the story of these characters takes place, add an expressive touch. The colours chosen are used to make the scenes more eloquent. On several occasions, there is an alternation between a sharp icy blue and shades of yellow, orange and red, projected over the faces of the characters, which can be linked to the emotions they are going through as they speak. The warm tints alluding to fire and its symbolic ardour. Vittorio Storaro’s eye presumably had a lot to do with this. Moreover, the director depicts here the confrontation between reason, the safety it provides, and temptation, with all the surprises it has in store. Like in some of his previous films, rain was used once more as an erotic catalyst.

Finally, it was a pleasant and rather unexpected surprise to see Bobby (Steve Schirripa) and Paulie (Tony Sirico) from “The Sopranos”, back to work again as Italian mobsters.