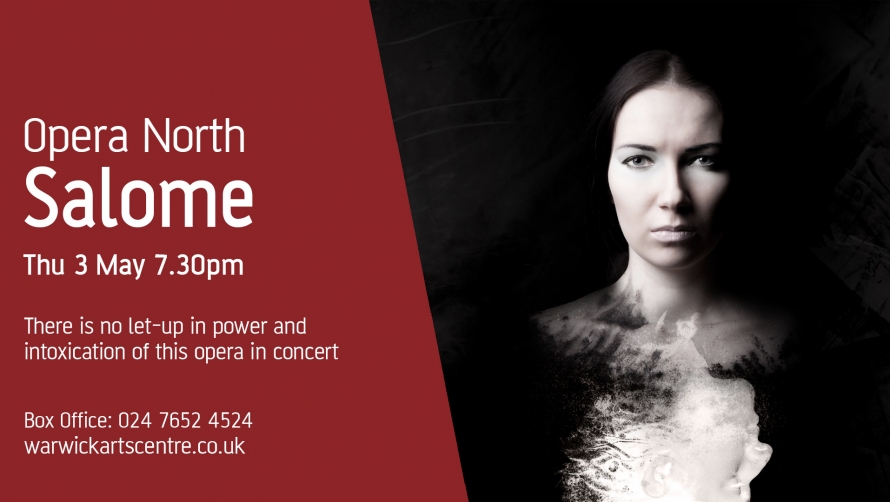 Rehearsals are now underway for the latest in Opera North’s acclaimed series of concert stagings: Richard Strauss’ groundbreaking Salome, under the baton of Sir Richard Armstrong. Sir Richard tells us more about the opera and what he is looking forward to about working with the Orchestra of Opera North again.

How would you describe the music of Salome?

Salome is the most amazingly kaleidoscopic score. It premiered in 1905 and caused an absolute sensation at the time, because, after Wagner had written all of his major operas (which in themselves were revolutionary in length, enormous orchestra etc.), this was really the next piece down the line. When it was first performed, people had literally never heard anything like it! The writing is so colourful, so gripping, sensuous, violent, very lyrical but also abrasive and discordant, all according to the needs of the drama.
The opera goes in one 100-minute span, and it has to be in one span because it is unstoppable! It is like a coiled spring that gets tighter and tighter, until it all blows apart at the end.

What kind of impact can the music have on audiences?

In one word, the piece does still shock – the subject matter, what happens to this girl (Salome) psychologically, and the way the drama is portrayed through the music. It remains a terrific experience to hear Salome performed live.

How do you think hearing Strauss’ extraordinary score in concert (rather than in the opera house) will make the audience experience differ?

I have been very interested to watch the progression of Opera North’s concert stagings, and there is definitely something extra that you can get from a concert performance, provided that it is really well presented and prepared. The audience are able to see all the instruments being used on display as well as being able to hear them, and with a particularly large orchestra such as that of Salome (which includes a big brass section, harps, celeste, lots of percussion etc.), this delivers an extra thrill. The audience will also be able to hear the orchestra with an extra clarity that you get in concert halls, which often have better acoustics.
I was very taken with how well last year’s concert staging of Turandot worked in all of the concert halls in which we performed, and I think the music of Salome can have that same kind of effect.

Do have you have a favourite moment in the score?

The whole thing! Because once it starts, it doesn’t stop, so there are no ‘numbers’. The Dance of the Seven Veils and Salome’s final monologue are sometimes extracted and performed in concert, but they really belong in context – that is where they make the most sense.
Also, the role of Salome in itself is an incredible thing to experience – she is there, on stage, for an hour and a half solid! The role is a real tour de force.

What are you most looking forward to about working with the Orchestra of Opera North again?

I have conducted here twice before (Beethoven’s Fidelio in 2011, Puccini’s Turandot in 2017 and now Strauss’ Salome), which are all pieces utterly different in style. I am looking forward to sharing Strauss with them, with a score the orchestra hasn’t played for a long time and which will be new to many of the players. With Turandot last year, the orchestra sounded as if they had been playing the piece all their lives, but had never played it before! It is always a privilege to guide an orchestra in a piece which is new to them.
With a fine orchestra (and the Orchestra of Opera North is a very fine orchestra), a score like Salome remains a fantastic challenge for all the players. I’m looking forward to the work, to building it with them and sharing the glories of this music with the musicians.

Don’t miss Salome in this special concert version by Opera North on Thu 3 May 7.30pm. For tickets and more information click here.