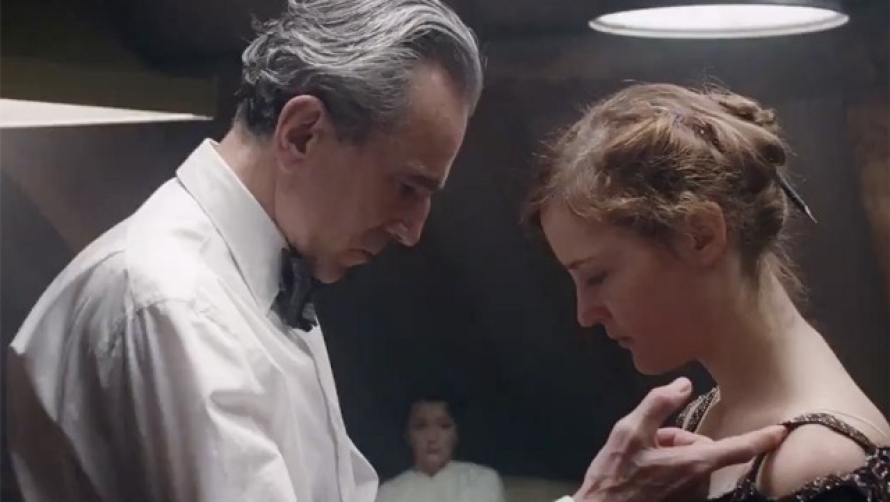 The last time Paul Thomas Anderson and Daniel Day-Lewis joined forces they gave life to a masterpiece: There Will Be Blood. Phantom Thread is their latest oeuvre. The two pictures share more than being the product of this collaboration, but we’ll come back to that later.

I’ll admit it, I watched Phantom Thread twice, on a three-day interval, in two different cinemas. The first time I watched it, I left the movie theatre wanting more. Too many questions left unanswered, too many aspects of the film and its characters still obscure, and I just wanted the pleasure of experiencing it, again. This feature gave me a strange feeling, one of simultaneous comfort and discomfort, comprehension and confusion. And this why it is so beautiful. It gives the spectator a sight and feel of beauty, material and psychical. Certain shots, by their realism and allure, precision and authenticity, can make the spectator feel he is a witness inside the story.

In London’s 1950s, Reynolds Woodcock (Daniel Day-Lewis) is one of the most talented and sought after dressmaker, whose reputation spreads way beyond British borders. The
refined, opulent, sumptuous way of life leads, grows destabilised by the subversive nature of his new muse and lover, Alma (Vicky Krieps).

Woodcock seeks domination and control, objectifying the women he interacts with, like if they were merely live mannequins, lucky enough to wear the gowns that bear his name. Alma refuses this, she resists. She understands the man, and what he needs to create. She is part of the creation process. Reynolds acknowledges it too, although never vocally admitting it. This is where the connection between Reynolds Woodcock and Daniel Plainview (There Will Be Blood) is found. Two obsessive masculine figures who live through power, victim of their own rigidity, and the ensuing incapacity for self-questioning. Their rigidity is their curse. This point helps reveal Paul Thomas Anderson’s own obsession with specific male characters and their obsessive personality.

At first glance the lovers appear to be trying to survive each other, especially the woman. But as the fog begins to disappear, the game they play comes to light. Reynolds and Alma almost frolic with danger and pain, using the vulnerability and fear provoked by this flirtation to truly let the other in, while the shell is cracked and open. Like wind blowing through an open door.

The fever induced by Alma’s occasional use of a particular cooking ingredient, made him vulnerable physically and emotionally, setting her in a position of direct control over his life as she was the sole person by his side. As if a healthy balance of power in their connection was not possible, unsuitable to the nature of their desire.

She plays with Reynolds’ limits, and he feigns giving in to her games, because he knows this is the way through which they can live their romance and love fully. He voluntarily gives up his position of tyrant, to regress into the one of a child, needing a feminine figure to take care for him, like a mother would. He can let go and let himself be tamed.

His part in Phantom Thread is said to be Daniel Day-Lewis’ last performance as an actor. Nonetheless, considering the fact that he already changed his mind on this very subject in the past, only time will tell if this true. His talent once more blasted expectations. For the sake of acting and cinema, he stopped being Daniel Day-Lewis, slipped out of his own skin, and became an exceptional, anomalous British dressmaker.