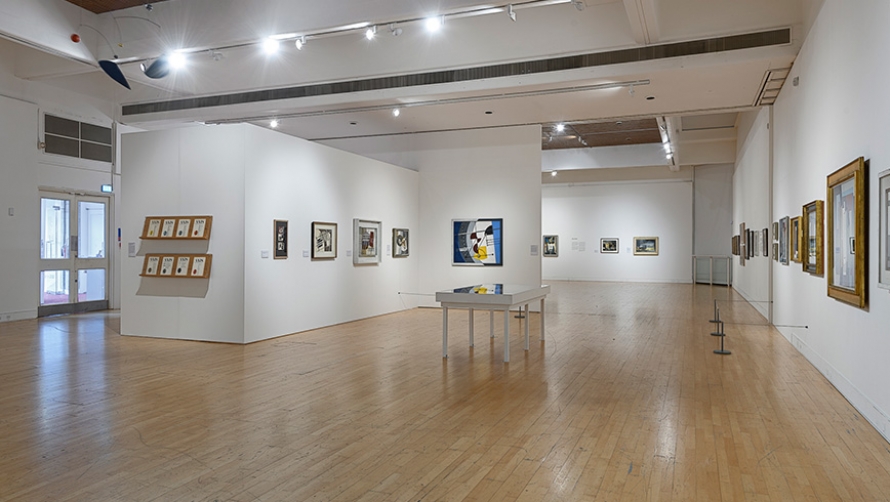 John Piper was one of the most significant British artists of the 20th century; his work has strong ties to the city of Coventry, which he visited the day after the 1940 Blitz and for whose cathedral he designed a stunning baptistery window. From May 1st to June 21st, the Mead Gallery at Warwick Arts Centre will present an exhibition of some of his most important works: paintings, collages, textiles… Clelia Furlan, one of the Warwick Arts Centre Student Ambassadors, spoke to Deputy Curator Fiona Venables about Piper, the exhibition, and future Mead Gallery projects.

CLELIA FURLAN: I’d like to begin by asking how the exhibition was conceived and how it relates to the present – how does it speak to current concerns?

FIONA VENABLES: We really wanted to explore the relationship between the history of Coventry and the visual arts, particularly in the last century; Piper’s work allows us to tell a story about what happened in 1940 with the Coventry Blitz but also about what happened afterwards, when the city became a place of restoration and reconciliation. These themes are especially important in light of Coventry becoming City of Culture in 2021 – they allow us to look forward as well as backward.

CF: Which leads to our second question – what do you think becoming City of Culture will mean for the city and for the Arts Centre?

FV: The Mead Gallery, along with the Arts Centre cinema, is about to close for two years for the renovation works that will be completed in 2020; the John Piper exhibition is the last in our current space. We will keep exhibiting works across campus and are working on an exhibition titled Journeys with The Waste Land inspired by T.S. Eliot’s poem, in collaboration with the Herbert Museum in Coventry where it will be on show. The reopening of the gallery in a new ground floor space at the Arts Centre will be quickly followed by the beginning of the City of Culture year in 2021, during which we will collaborate with various partners across the city to deliver a cross-artform programme that will hopefully benefit the city economically but also in terms of access to and engagement with the arts.

CF: Could you tell me a bit more about how the exhibition programme at the Mead Gallery is curated? What kind of themes are you interested in and what’s the relationship between the gallery and the university’s art collection?

FV: The University of Warwick Art Collection actually predates the existence of the Mead Gallery, going all the way back to the founding of the university in the 60s. It was never conceived for a gallery but as an integral part of the environment and the buildings of the university, of the places in which people lived and worked. It is still very much curated in this spirit, and when the Mead Gallery opened it was decided that it would work in parallel to the collection rather than housing it per se. On the other hand, we try to make links between the collection and the exhibition programme around themes such as abstraction, colour, painting… We recently dedicated an exhibition to paintings by Clare Woods – one of them had previously been acquired for the university collection. Another earlier exhibition was focused on colour and space, taking a more environmental approach; so we like to interpret a few key themes in different ways.

CF: These themes are also present in the John Piper exhibition.

FV: Absolutely. There are all sorts of serendipitous relationships between Piper, the city, the university, and the wider historical and cultural context. In terms of the art world, there are links between the founding part of the University of Warwick Art Collection – which consists of several abstract paintings – and Piper’s work, who was experimenting with abstraction and whose choice to design a non-figurative window for the newly reconstructed cathedral was pretty radical for the time. The cathedral itself was consecrated in 1962, and the university was founded only three years after that – it was a really important period for the city.

CF: But Piper was also present when the old cathedral was destroyed in the Second World War. Could you tell us a bit more about that period and about his earlier involvement with the city?

FV: In 1939 Piper became part of the Recording Britain scheme, initiated by Sir Kenneth Clark; its purpose was to document places and lifestyles that were perceived to be at risk. This was part of an international phenomenon, with similar initiatives being taken in the U.S. and Russia, for example – there was of course a sense of war looming, but more generally people felt that industrialization and modernization were leading to rapid and irreversible changes in society and the environment. When the Second World War broke out in Britain, Piper was persuaded by Kenneth Clark to work as an Official War Artist for the War Artists’ Advisory Committee. His first assignment involved producing paintings of a very secretive air raid precaution control room in Bristol; he really disliked the assignment and, I suspect, later found ways to fit the Committee’s directives to his interests. He was sent to Coventry the day after the 1940 Blitz – an air raid which killed almost 600 people and badly damaged two thirds of the city’s buildings, including St Michael’s cathedral. Piper produced, among others, sketches and paintings of the ravaged cathedral, true to his interest in historical buildings threatened by the war. He was sometimes criticized for not depicting any human figures: his drawings and paintings have a stark, theatrical quality – their resemblance to stage sets was also at times criticized. In hindsight, however, these features give his works a real power, a sense that the horrors of the war could happen again, like a theatrical production, and they also invite the viewer to imagine the people affected by this tragedy, which can be more effective than merely representing them.

CF: Piper’s love of British landscape and architecture is evident – it permeates all of his works. Could you elaborate on this aspect of his art, on his sense of place?

FV: Piper was, from a very young age, extremely fond of walking and recording his surroundings; he had a longstanding interest in landscape and architecture. He was also fascinated by medieval art, including architecture, stone carvings, and so forth… activities that are generally considered ‘crafts’ and not fine arts. This was connected to his exploration of British identity and character; his approach, however, was never nostalgic. He always kept an eye on what was happening in Europe, particularly to the abstract work that was being produced by artists such as Picasso, Braque, and Léger. He combined all of these different languages – the old and the new – to elaborate a perspective that always looked forward, retaining a sense of place without becoming insular. I think these questions are still important today, especially with Brexit and the rhetoric that surrounds it: how do we figure out the balance between British identity and the wider international context, how do we produce a cultural language that speaks to the present and doesn’t just repeat the past?

CF: Piper also liked to work with different media – what do you think was the drive behind the evolution of his work and the different shapes it took?

FV: Piper always enjoyed working collaboratively; his most important collaborator was probably his partner – and later wife – Myfanwy Evans with whom he founded the influential art journal Axis, and in general he was very good at forging professional and personal relationships with other artists and creatives. This allowed him to experiment with a number of different media besides painting: glasswork, obviously, but also book design, textile design… In the course of this exhibition, I have heard criticism of the fact that Piper did not physically make the Coventry cathedral window: he designed it but it was constructed by Patrick Reyntiens. Conceptual artists today are sometimes criticized for not making their artworks and relying on other people’s expertise, but what they don’t realize is that this is not a new phenomenon: it’s a practice that has existed for a long time and really doesn’t undermine the value of the work itself or of the artists involved.

CF: For example, Italian Renaissance painters all had their workshops with assistants who helped them with their work.

FV: Exactly, and this allows artists to learn new techniques, experiment with new solutions and develop their style. The Coventry cathedral window was very much a collaborative effort that proved incredibly productive for both Piper and Reyntiens.

CF: We’ve reached the end of the interview – thank you for such an interesting discussion. I have one final question: why should students come see the John Piper exhibition? What do you think we can learn from it?

FV: The exhibition is strongly linked to a specific artistic and historical context; it tells a story about Britain in general and about Coventry in particular – as we have seen, Piper was present during two pivotal moments in the history of the city, its destruction and its reconstruction. It really shows how art is not just decoration but can tell a story about a place and a time, about the aspirations of a city… it can give a sense of who you are and where you are, and I think this aspect is conveyed really effectively in Piper’s works.