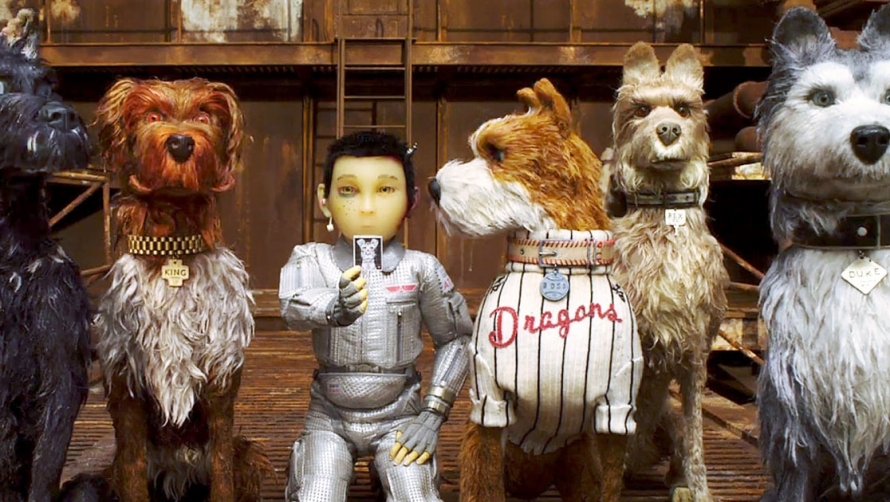 In reaction to the recent canine flu epidemic in Megasaki, Japan, Mayor Kobayashi, along with his inner circle, decides to send all dogs to ‘trash island’, a place for them to die in slowly. 12 years old Atari refuses to abandon his dog and companion Spots, sent to the island, and flies over there in a stolen plane to save him. So begins the search for the lost dog, and truth.

Director Wes Anderson took a political tone in this story. Even though Megasaki is deemed as futuristic, its ruthless politicians and leaders and the way they operate can be paralleled with the current political climate in several countries. The looming conspiracy, with the power in place blaming a defined group (dogs in this case) for the city’s problems, constitute a fertile ground for mass manipulation and the enforcement of a secret agenda.

Nevertheless, despite the hard reality denounced in this film, there is not an ounce of cynism to this tale. On the contrary, what was clearly headed to be a dystopia turns out to be a utopia. As in Moonrise Kingdom and The Grand Budapest Hotel, it eventually turns out that it is children who bear hope, acting for what they believe to be right, despite fear and danger. They have the power to make a difference, change the course of events.

The strong focus on designs and decors, the costumes, and the overall colour of the picture is a central element of Anderson’s stories. This is manifested strongly in this picture, notably in the detail of the puppets used for the animation. Each and every puppets were handmade, first as clay sculptures, before eventually being painted and finalised. All the scenes were filmed in stop-motion but with puppets instead of drawings, and consequently the tempo and speed of the characters, on screen, is affected and feels different than in other animation films. Moreover, there was sort of a mise en abyme of the animation in selected scenes, where animation is found in animation. For example, television screens within the film displaying animation themselves. Over and above that, the director’s signature symmetric framing added a polished touch to the action.

This feature can be seen as an homage to Japanese culture. To begin with, the Japanese human characters in this story speak Japanese, as it could be expected, but with no subtitles for the spectator to read, just the words to hear. In addition, one scene was dedicated exclusively to the depiction of the almost surgical preparation of a typical local dish, containing rice, fish and algae. Coincidentally, the Japanese are very well-know for the great quality and singularity of their animation, with the likes of Hayao Miyazaki who directed, amongst many other films, Howl’s Moving Castle and more recently The Wind Rises.

Although this is not Wes Anderson’s first try at animation, as he previously directed Fantastic Mr Fox, he pushed the limits much further this time, especially from a technical perspective.