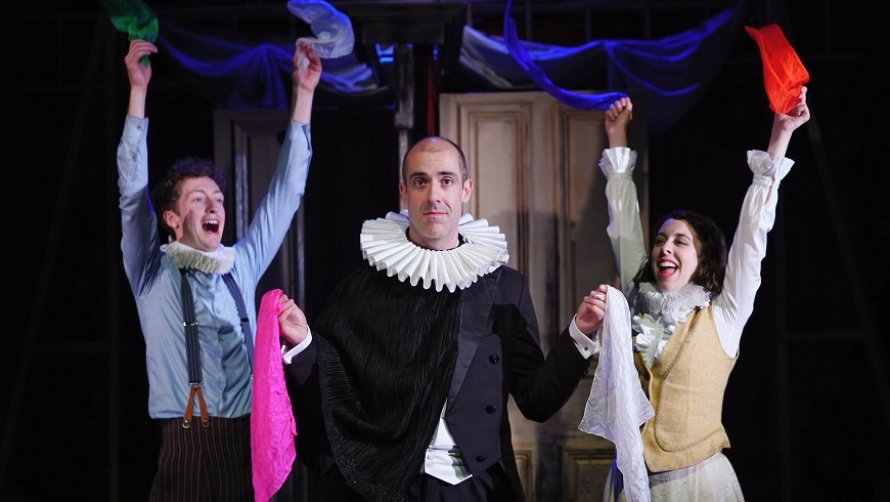 Venturing to the Edinburgh Fringe Festival is always an excellent opportunity to see a huge range of theatre, comedy and a little bit of everything else. This year it gave me a wonderful chance to see Tall Stories’ The Canterville Ghost, before it tours here to Warwick Arts Centre this Christmas.

The stage is dimly lit, music plays and we’re quickly introduced to a company of vaudevillian performers: an illusionist, a psychic, a ventriloquist, and their musical compere. They’re here for one night only to bring you a series of amazing acts and the re-enacted story of The Canterville Ghost.

After a quick chat with Olivia and Toby (co-directors of Tall Stories) before the show, I learnt that each of the cast brought their own skills to the performance. Tom studied illusionists like the Great Cardini. Steve, as the compere, was inspired by singers such as George Leybourne. Matt’s ventriloquist act came from research into Dan Leno, the comedian that spawned others like Laurel and Hardy. And finally, Lauren and her psychic act, follows in the footsteps of famous medium and stage mentalist Anna Eva Fay.

My favourite moment in the show was in fact during a psychic reading. There was a hush across the audience as the spirits began to commune from the other side. The Psychic quickly honed in on an audience member; “Are you a teacher”, the Psychic asked. “No,” replied a woman in the row in front. “Oh, but you do work with books, don’t you? Maybe a Librarian?” A moment’s pause. “Yes, I am.” For a brief second, the Psychic was amazed. Had she really got a reading right? The audience were impressed too and started to clap until the woman continued, “No I’m not really…” Audience participation at its finest!

Of course let’s not forget the Canterville Ghost himself. For anyone who has read Oscar Wilde’s novella, first published in 1887, the story is based on the original, but with a Tall Stories’ twist. Doors and passageways glide around the stage to create an ever-changing maze of corridors and rooms of the Canterville Estate. Inventive lighting creates the dark passageways that the ghost can roam in to scare the new owner and his children.

But what links these vaudevillian Hall Performers and the story of the Canterville Ghost? You’ll just have to see the show to find out.