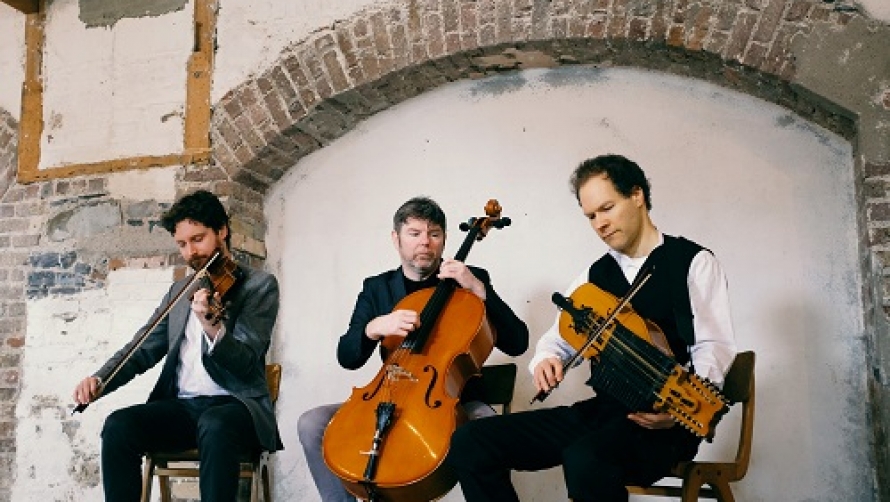 Kevin Murphy, cello player and vocalist for Dublin based contemporary acoustic band Slow Moving Clouds, tells us about their music, their influences and Dublin hot-spots…

Can you tell us a little bit about the band and what first-time listeners can expect from your music?

We got together a few years ago with a view to exploring how Irish and Finnish traditional music could be approached in an experimental way. New listeners can expect to hear something that they have never heard before and I don’t mean that in an arrogant way; I just mean that this fusion of influences hasn’t been done before, to the best of my knowledge.

That said, the music is neither avant garde nor academic sounding, but rather is accessible and emotional. We are using a lot more vocals now and I think that has made it more accessible for people. The vocals are very influenced by My Bloody Valentine, Sigur Rós and the Cocteau Twins. So there is a kind of other-worldly flair floating on top of the more earthy traditional influences. While some of the music sounds quite airy, more of it drives in a relentless and aggressive way.

How did the band first come together?

I was playing some experimental music with Aki and he was playing in a duo with Danny doing Irish, Finnish and American music. We basically decided to draw the different strands together into one band.

Where does the inspiration for your music come from?

The music primarily draws on traditional influences, but its fair to say that we take a lot of liberties. Irish and Finnish tunes are fused with post-punk, experimental, contemporary classical, minimalist influences in an attempt to harness the intersection between the earth and the heavens. It is aimed at reflecting the dual and contradictory aspects of the life we exist in – good/evil; dark/light; order/chaos.

You use some pretty interesting instruments; do you have any particular favourites?

Yes, people are very curious in particular about Aki’s nyckelharpa, which is a Swedish instrument, though also used for traditional Finnish music. It looks amazing and has a beautifully rich and spacey sound. Aki has also created other new weird stringed instruments, the names of which I don’t know, which appear to be versions of gambas. On a personal level, I play the Marxophone which I love and I am also a sucker for all kinds of zithers and other lap harps. Generally we are lovers of stringed instruments of all types.

As well as interesting instruments, you use different types of music in your work. What first inspired you to use a blend of music?

With regards to instrumentation, the three work really well together. The cello can add a hypnotic and pulsing low end. The nyckelharpa provides a lush middle ground while the violin sits on top. Sonically it means that most ranges are covered, resulting in a very full sound.

With regards to mixing styles, I suppose that blending is a function of experimentation. Our sound is rooted in Nordic and Irish traditional music. To bring the two traditions together, we needed to create a new sound-world which was broadly influenced by their sounds, but which stood apart from both traditions. We ended up incorporating ideas from experimental, post-rock, electronic and even Baroque music, alongside our folk roots. Then we reworked Irish and Finnish music to fit into this world and, by extension, fit with each other. If that makes sense!

Once we established our sound and our way of working, our music gradually evolved from arranging traditional material into writing our own songs and instrumentals from scratch.

Starfall is your second album. What have the challenges been in creating this album compared to your debut, Os?

There were indeed big challenges, mainly of the ‘what exactly do we want to achieve’ type. Once these were addressed and we were basically solid in what we wanted to do, it became easier. Some tunes drifted further away from the central template and had to be jettisoned, which was a very painful process. On the other hand, we were delighted with what was left. We believe in all the tunes and the how they relate to each other.

You created a score for an adaptation of Swan Lake in 2016. What was it like to create music for such an iconic performance?

It was an amazing experience! The work on Swan Lake was totally collaborative. We brought in pre-existing music from our individual and collective repertoires, which was then reshaped to suit the needs of the piece. We also improvised with the dancers and actors in the company as part of the creative process, guided and shaped by the writer/director Michael Keegan-Dolan. As the show came together over a couple of months, pieces of music began to emerge from these improvs, some of which found a home in Swan Lake, and some also now feature in our live set.

Being based in Dublin, you’re spoilt for choice with music hot-spots! Any favourites you can recommend to us?

For traditional music The Cobblestone is probably the most popular destination and with good reason. Beyond that Hughes is probably next on the list (stay away from Temple Bar). Regarding more contemporary music, Whelan’s or The Workman’s Club are probably favourites.

And finally, what words would you use to describe what audiences can expect from your performance on 23 Oct?

Slow Moving Cloud’s ethereal, incredible live performance will be in the Theatre on Tue 23 Oct at 7.30pm. For tickets, click here.