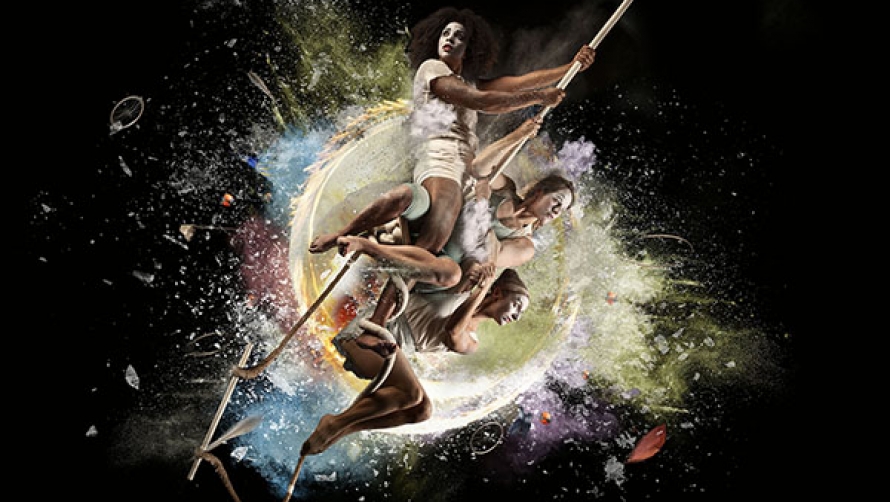 Ruzhin Babaei doesn’t have your average day job. As the rigger for Mimbre’s new show The Exploded Circus, she spends most of her time climbing, designing and creating elaborate rigs for circus performers! We asked her a few questions about her work and the show…

What is The Exploded Circus about?

It’s is about being given a second chance in life and how you would rebuild your dreams with people you wouldn’t necessarily know or think you would get on with.

Can you tell us what the rigger’s job entails?

A load of fun! Climbing up and down the truss, pulling ropes and people up and down, hanging props and lights, coming up with creative ideas of realising the directors vision especially in this show, and making sure nothing gets tangled.

How did you get into rigging?

I moved in with a circus a few years ago as a film maker, as I was documenting the set up and the shows, I developed a serious interest in climbing. I love the challenge, it is physical and scientific. I spent a long time following the riggers, watching them work, giving them a hand and asking loads of questions.

You’re responsible for the performer’s safety in the air, which is a big responsibility! What’s the most difficult part of your job?

Well the most important part of my job is ensuring everyone’s safety, but the most difficult part is when you’re on tour and you find out that your girlfriend has found your secret stash of walnuts and you can’t do anything about it.

Can you tell us about the stage of The Exploded Circus and how you went about working with that?

We have a ‘made for purpose’ truss and every single piece and prop is made or chosen and painted by our set designer and her assistant. It took around 2 weeks of holding small and big objects with thin rope over the top of the truss and moving them slightly up and down and right and left. Then we measured and marked where each object lives.  After that it became a continuous group effort of coming up with ideas of how to attach and re attach them. There is a lot going on up there. Finding a balance between the way the stage looks and the safety has been an ongoing challenge especially when we had to add all the lights on top.

The aerial feats in the show look pretty impressive. How long does it take to set up a system for all of those amazing tricks?

Every show has its own unique requirements. During the 6 week rehearsal in London, our director Lina, the aerial choreographer Mélissa,  and myself worked alongside each-other to find the best way of setting up a practical system whereby some points are in multiple use and are out of the way when not needed.

Now, we’ve done a bit of Googling and there’s an interesting piece of history about riggers; apparently it became bad luck to whistle on British stages because riggers would use whistles to signal set changes, like riggers on a sailing ship. Do you ever take to whistling while you work?

No I don’t whistle. Stuff like this is part of the magic of the circus and I like to keep the tradition.

If you had just three words to describe The Exploded Circus – what words would you use?