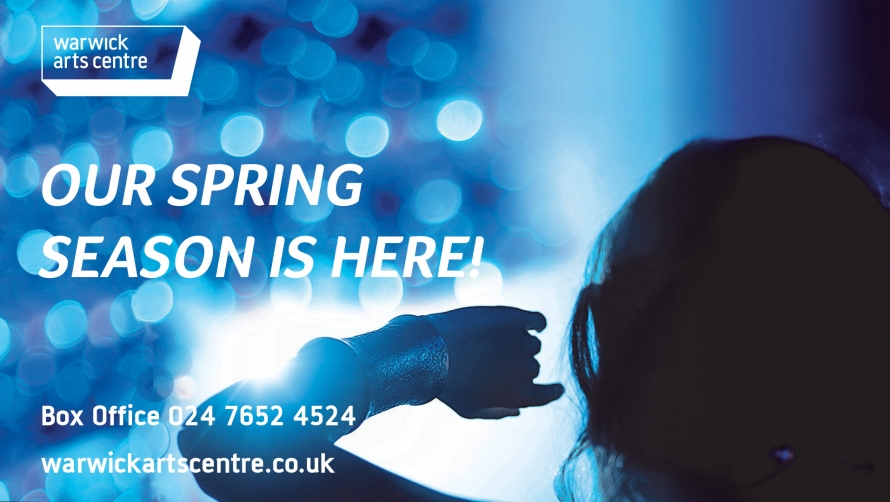 Warwick Arts Centre presents a spring season full of breath-taking performances from big name theatre and dance companies, fun for all the family and a stellar line-up of comedy and music.

Warwick Arts Centre’s new Director, Doreen Foster, who has been at the helm for three months, says:

“It’s been wonderful to return to the West Midlands, where I was brought up and started my early career. My programming team have put together this wide-ranging list of events for our Spring 2019 programme, and I look forward to joining our audiences from Coventry and Warwickshire – and sometimes from miles beyond – for some fantastic nights of entertainment, adventure and enlightenment.”

In an evening exclusive to Coventry, BBC presenter and historian Dan Cruikshank (Fri 18 Jan) will be exploring the fascinating parallels between Palmyra and Coventry – two cities that have faced extensive destruction and reconstruction. Legendary explorer Sir Ranulph Fiennes (Tue 29 Jan) will be taking audiences on a journey through his extraordinary life and ex-castaway and TV favourite Ben Fogle (Wed 6 Mar) is set for an evening of storytelling as he shares his tales from swimming with crocodiles to conquering Mount Everest. Co-founder of the Women’s Equality Party, Catherine Mayer (Thu 7 Mar), will offer a frank and funny analysis of current times and, following his international bestselling book being turned into the hit BBC TV series McMafia, Misha Glenny (Sat 23 Feb) explains what’s been happening behind the headlines.

Continuing its tradition of making the finest contemporary performance accessible to Midlands audiences, Warwick Arts Centre’s spring programme features a host of the best theatre companies. Birmingham-based Stan’s Cafe present a mediation on society in the form of their new show The Capital (Tue 12 Feb), whilst Green Ginger’s Intronauts (Wed 20 – Fri 22 Feb) is a wacky story about advancing technology set in a not-too-distant future. This year’s Best of BE Festival (Mon 11 Mar) features a daredevil, an illusionist and a juggling-computer-musical genius, all combined into one neat evening of the best new European work.

For any lover of performance, Warwick Arts Centre’s SOLO Fest (Mon 4 – Thu 7 Feb) is a four day festival that showcases the best in solo work. Curated by Warwick Arts Centre’s programming team, shows by young artists, including Keisha Thompson, Tatty Hennessy and Toby Thompson, combine with pop-up performances and post-show gossip events. There will even be a chance for local writers and performers to submit and showcase their work. Check the website for more information on taking part.

There’s plenty for families to get involved with as Nick Sharratt (Sun 3 Mar), the much loved illustrator of Tracy Beaker and other Jacqueline Wilson classics, presents his Right Royal Drawalong, an opportunity for everyone to learn how to sketch from the best. The Wrong Crowd’s Kite (Mon 18 & Tue 19 Feb) is a play without words, told with original music, dance and puppetry, whilst China Plate’s adaptation of Romeo and Juliet (Sat 9 Mar) is sure to be an unforgettable introduction to Shakespeare. Or, for the very young, Nest (Sun 10 Mar) takes audiences on a multi-sensory journey through the seasons.

Percussionist, composer, and Mercury Music Prize winner, Talvin Singh (Thu 14 Feb) leads Warwick Arts Centre’s music programme with his fusion of Indian and electronic music, and Syrian acoustic virtuoso musician Maya Youssef (Fri 15 Feb) follows. The Yamato Drummers of Japan (Tue 19 Feb) are back in the UK and will explode into Coventry having captivated audiences all around the world, whilst the iconic jazz club, Ronnie Scott’s (Fri 8 Mar), is celebrating its 60th Anniversary with a commemorative tour. Musical legends in the new season include Tommy Emmanuel (Sat 9 Mar), widely acknowledged to be the master of the solo acoustic guitar, and Georgie Fame (Sat 16 Mar), whose impressive career spans over 50 years and includes 20 albums.

Warwick Arts Centre are ready to galvanise the next generation of classical music lovers as they welcome the National Youth Orchestra of Great Britain (Fri 4 Jan) to their stage following a residency at the University of Warwick over the New Year. With £5 tickets available for Under 25s, they’ll be playing through a programme including Rick Dior’s Science Fiction and John Adams’ Doctor Atomic Symphony, complete with projections of classic scenes from B-roll sci-fi films.