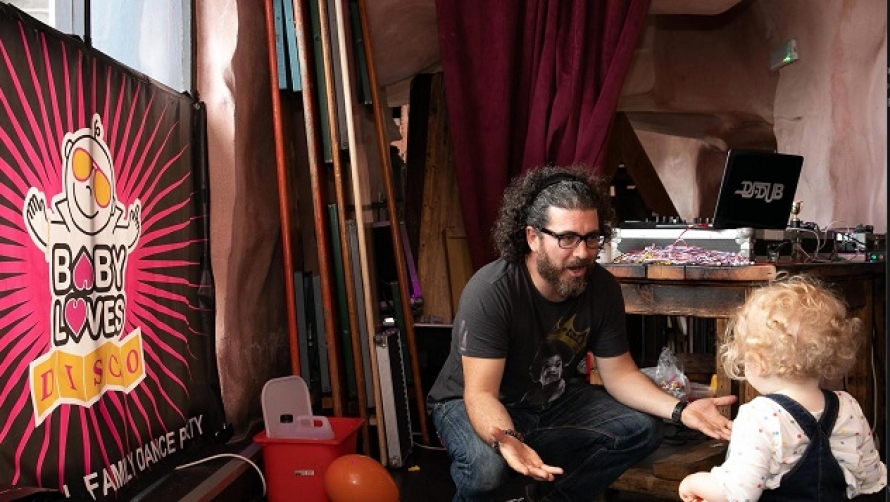 Among the many treats lined up for our latest Family Day on Sun 16 Jun is Baby Loves Disco – a UK-wide phenomena that finds established club DJs host daytime parties for parents with babies, toddlers and young children (0-7 years). With no sign of Wheels On The Bus, DJs spin everything from the latest pop tunes, to 70s-80s classics, to 90s-00s bangers, all at a baby-friendly volume.

One of the DJs who has seen the Baby Loves Disco experience explode is DJ Dub, who’ll be hosting our raves at 11am and 2pm.

How did you first get involved with Baby Loves Disco?

I’ve been DJing for Baby Loves Disco since it started in the UK in 2007. I got the gig through a mate of mine Rob Pursey (the man behind Hip Hop Karaoke) who was the first UK Baby Loves Disco DJ. He’d got the gig from a recommendation by some of the DJs who played at the original Philadelphia and New York parties, shouts to DJ Eleven, DJ Ayres and Cosmo Baker!

For those who’ve never been to a Baby Loves Disco gig – what can they expect?

The central idea behind Baby Loves Disco is a party at which parents and kids dance together. We play music to make the adults dance as much as we do for the kids. It’s not a kids’ disco where all the adults sit around and watch while the kids run around screaming, sound-tracked by The Gummy Bear song. We play a wide range of genres from disco (of course) to modern and classic pop through R&B and hip hop, house, rock and indie, reggae – basically anything that gets people up and dancing. We also play dancefloor games (freeze dance/musical statues), we have dancers teaching basic steps, and have a whole range of songs where everyone has to dance like a dinosaur or do a particular move. We always have a hotly contested mum and dad dance off to find the best mummy and daddy dancers in the audience. Essentially we’re trying to let parents relive/recapture their halcyon pre-children clubbing heydays.

Apart from the age, how do Baby Loves Disco audiences differ from club audiences? Are they more enthusiastic maybe? Less inhibited?

It’s quite like DJing at a wedding in that you have a much wider age range than you’d find in a club, and there are songs that it’s not appropriate to play to kids, but other than that I approach it like I would any other gig – reading the crowd responding to what they’re dancing to. I love seeing how the kids respond to watching their parents react to a song and vice versa.

Are those younger dancers quite critical?

Quite the opposite, they’re super enthusiastic and in my experience more open to dancing to songs they don’t know, as our target audience for the kids is 0-8 at that age as long as mum or dad are dancing they’re more than happy to throw some shapes!

What are some of the tracks currently on your playlist?

Ed Sheeran’s Shape Of You is a big mummy dance off tune.

House of Pain’s Jump Around always goes off, and all you have to do in terms of dance moves is jump up and down.

Justin Timberlake’s Can’t Stop the Feeling! – it’s from a kids film (Trolls) and is also a perfect pop record and often soundtracks the dad dance off.

Reel 2 Reel’s I Like to Move it – this is a Baby Loves Disco certified dancefloor banger, to such an extent I can cut the fader out at the chorus and everyone shouts move it… it’s like being in a proper rave!

What are you up to outside of Baby Loves Disco?

Not much outside of London at the moment, I do a regular gig at a little club on Portobello Rd and there’s a bunch of mixes on my website and Mixcloud.

What have been some of your biggest/ best gigs outside of Baby Loves Disco?

Biggest gig was DVJing at Glastonbury for Riz MC a few years ago, and I often do gigs with long-time friend and collaborator, and Warwick alumni, DJ Yoda (he taught me how to scratch) which are always fun!