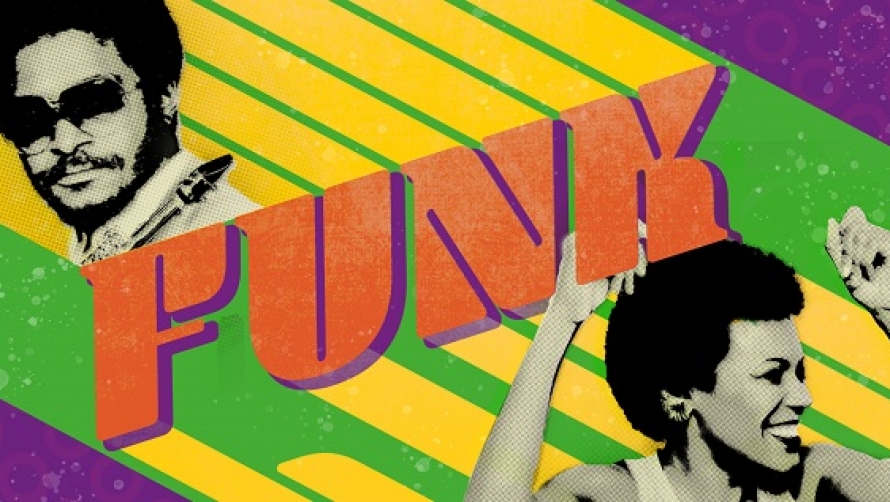 In preparation for our FUNK – A Music Revolution gig on Mon 2 Mar, bandleader Pee Wee Ellis has selected a few classic funk tracks to get you in the mood.

Recorded in 1967 and written by Pee Wee Ellis and James Brown, the two-part Cold Sweat is generally regarded as the first ever funk track, combining elements from R&B, gospel and (thanks to Pee Wee’s influence) jazz. Brown was an established R&B act who’d been performing since the 1950s. Interestingly, the accompanying Cold Sweat album features versions of such unfunky standards as Mona Lisa and Nature Boy (both hits for Nat ‘King’ Cole), and Gershwin’s I Love You Porgy.

Massive track from Stevie’s 1972 album Talking Book, which also included the hit ballad You Are the Sunshine of My Life. The LP was remarkably Stevie’s 15th studio album, having been signed to Berry Gordy Jr’s Tamla Motown empire in the early 1960s as an 11-year-old. Back then he was known as Little Stevie Wonder.

A 1970 hit from the multi-racial San Franciscan band fronted by Sly Stone. The band are credited as being one of the creators of ‘psychedelic soul’ which combined soul and funk with psychedelia.

1984 release from the Prince protégées, fronted by Morris Day. The track featured in Prince’s film debut, Purple Rain, but not on the accompanying Prince album of the same name. Alongside Day, The Time also featured Jimmy Jam and Terry Lewis, whose production work for Janet Jackson pushed funk into new directions during the 1980s-1990s.

The Meters – Just Kissed My Baby

New Orleans’ R&B band The Meters established a strong relationship with famed producer Allen Toussaint, recording many sessions with him as his ‘house band’ (including Dr John, Lee Dorsey, Robert Palmer etc). Together they paved the way for a distinctive New Orleans take on the funk sound. The raw Just Kissed My Baby was released in 1974.

Tough electronic funk from 1986 that shows the influence of Prince and then new technology. Fronted by Larry Blackmon, Cameo had been releasing more traditional soul/disco/funk tracks since the late-70s. Word Up! is also the title of their 12th album.

British-American producer, DJ and musician Ronson collaborated with vocalist Bruno Mars for this 2014 smash. The track updated early 1980s funk with elements of rap and contemporary pop, to create a world-wide chart-topper. Listen carefully and you can also hear the influence of such artists as Prince, The Gap Band, Earth Wind and Fire, and many other funk greats.

If Pee Wee Ellis and James Brown’s Cold Sweat established the template for early funk, 1968’s Say It Loud… took it beyond the dancefloor and into the political realm. Quickly adopted as an anthem for the then growing Civil Rights Movement, concert audiences at the time would shout back “… I’m Black And I’m Proud” to Brown’s “Say It Loud …” . Fifty-two years later, the track has lost none of its power.