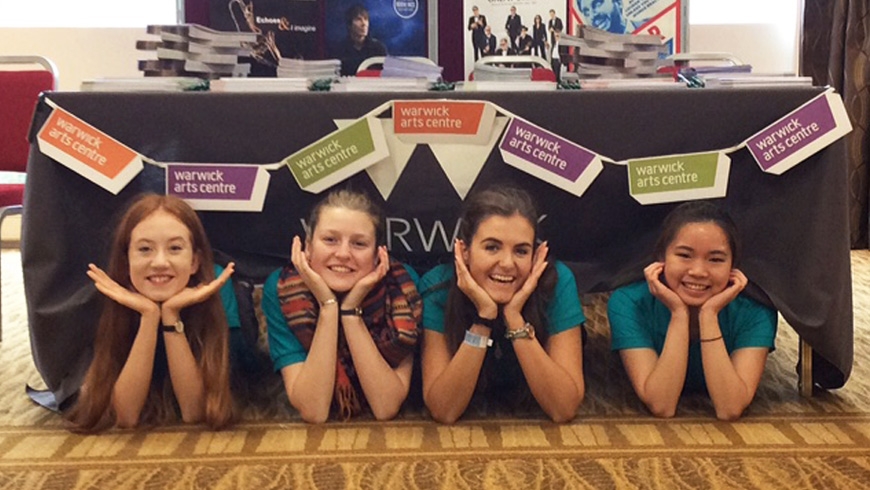 Thinking about becoming a Warwick Arts Centre Student Ambassador (formerly STARS scheme)? Here’s what past Ambassadors had to say bout the scheme:

Being part of the STARs scheme gave me confidence to throw myself into a variety of activities I wouldn’t ordinarily do. I reviewed, vox-popped, and marketed for the first time. It was something completely different from my Chemistry degree and it was something that was not only a chance to learn new things but it was also great fun with great people.

I joined the STARS team during my first year at Warwick and I absolutely loved it. I met amazing people who shared my passion for the arts and got a chance to see incredible performances! By taking part in numerous advertising campaigns, I enhanced my sales and marketing skills and learned how to approach strangers and make them interested in the Arts Centre’s performances.

My advice to new STARS would be to always wear their smile and to be extremely positive about the work they do. When other people see our enthusiasm and passion, they have no choice but to fall in love with the performances we sell!

Getting involved with STARS is without a doubt, one of the best things I have done at university! Not only have I gained valuable experience in marketing, I have met people I would never have come across otherwise, and had so much fun taking part in publicity stunts for various productions.

My advice would be to get involved with as much as you can; campaigns, flyering, vox popping and reviews, because you never know what you might discover. I had never even listened to opera before advertising for the English Touring Opera last year, but it turned out to be one of my favourite campaigns, as well as leading to being involved in marketing with Warwick’s own opera society. STARS is a unique chance to market for some of the UK’s top touring companies, as well as see all kinds of theatre, film and classical music for free, so just get involved with everything you can.

Working for the Arts Centre as a STAR is a brilliant opportunity and you should try and make the most out the experience as you possibly can! Even if the thought of either writing a review, talking to audience members or the actual physical campaigning side of things seems scary, sign up to do it anyway! Even if you just do it once during your time as a STAR, this is your chance to try something new and gain some different experiences. This also applies for signing up to campaign things you wouldn’t have thought you would usually be interested in, such as visual arts or classical music. It can be really rewarding to try something different. If you can, you should also try and take the opportunity to lead one of the STARS campaigns – it looks great on your CV and the STARS scheme is always something that interviewers pick out on my CV and ask me about. Also don’t forget to get to know the other STARS! There will most probably be a great friend lurking out there somewhere… and enjoy yourselves!

The next best thing to having a thriving public arts centre right in the centre of campus is being able to work for such an asset! I became a STAR as a fresher last year and have since met lots of new faces, seen many plays, written reviews, interviewed members of the public, travelled around to promote shows and helped organise family fun days throughout the year. I have gained invaluable experience getting involved in analysing different aspects of theatre, and have particularly enjoyed forming my own critical opinions on theatre styles as well as listening to those of others whilst vox-popping or gathering research. It has been so much fun getting involved in campaigns for events I have a particular interest in, from theatre to classical music and poetry, and I am proud to say my promotional photos are currently dotted around the internet as proof of this! My favourite event was definitely promoting the children’s show, ‘We’re going on a Bear Hunt’, at the Victorian Christmas Market in Warwick last year, where we spent the evening in bear costumes flyering and handing out balloons next to the old-fashioned market stalls. I am definitely staying involved this year and looking forward to meeting the new STARs on the team!