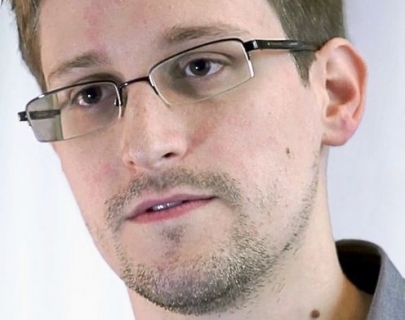 Edward Snowden is an American computer specialist, former employee of the Central Intelligence Agency (CIA) and former contractor for the National Security Agency (NSA). In June 2013 he came to international attention when he disclosed a large number of classified documents to several media outlets, including the Guardian, revealing operational details of a global surveillance apparatus run by the NSA and other members of the Five Eyes alliance, along with numerous commercial and international partners. The release of classified material has been called the most significant leak in US history, and by November 2013, the Guardian had published just one percent of the documents. Snowden is currently in an undisclosed location in Russia, having landed there for a one-night stopover in June 2013; he is considered a fugitive by American authorities who have charged him with espionage and theft of government property. A subject of controversy, Snowden has been variously called a hero, a whistleblower, a dissident, a traitor, and a patriot. Numerous media outlets and politicians issued calls for leniency in the form of clemency, amnesty or pardon, while others called for him to be imprisoned or killed. Snowden’s “sole motive” for leaking the documents was, in his words, “to inform the public as to that which is done in their name and that which is done against them.” The disclosures have fuelled debates over mass surveillance, government secrecy, and the balance between national security and information privacy.


Professor Sir David Omand was the first UK Security and Intelligence Coordinator, responsible to the Prime Minister for the professional health of the intelligence community, national counter-terrorism strategy and “homeland security”. He served for seven years on the Joint Intelligence Committee, was Director of GCHQ, and then Permanent Secretary of the Home Office from 1997 to 2000. David Omand is author of Securing the State (2010) and Visiting Professor at King’s College London.
Ben Fenton was until recently the Financial Times’ chief media correspondent, prior to which he was chief reporter for The Daily Telegraph, including an episode as the paper’s Washington correspondent. During the last twenty-five years he has reported on some of the most notable news stories from around the globe, including leading the Financial Times’ coverage of the phone-hacking scandal and Leveson inquiry.
Luke Harding is an award-winning foreign correspondent with the Guardian. He has reported from Delhi, Berlin and Moscow and has covered wars in Afghanistan, Iraq, and Libya. His book Mafia State: How one reporter became an enemy of the brutal new Russia (2011) tells of how he became the first reporter to be expelled from Russia since the end of the Cold War.
Ewen MacAskill is the Guardian’s defence and intelligence correspondent and has written extensively about the Snowden case. He was Washington DC bureau chief from 2007-2013, diplomatic editor from 1999-2006, chief political correspondent from 1996-99 and political editor of the Scotsman from 1990-96.
Gordon Corera is Security Correspondent for the BBC, where he has worked since 1997 as reporter on programmes including Radio 4’s The World Tonight and BBC 2 Newsnight. He is the author of MI6: Life and Death in the British Secret Service (2012) and Shopping for Bombs: Nuclear Proliferation, Global Insecurity, and the Rise and Fall of the A.Q. Khan Network (2006).