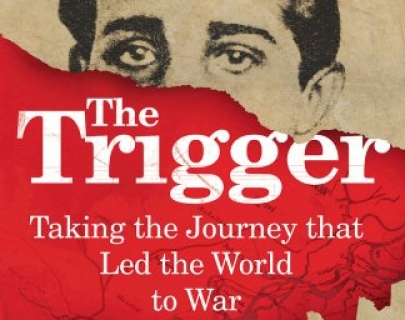 The Trigger: The Journey That Led the World to War tells the story of the teenage assassin who fired not just the opening rounds of the First World War but the starting gun for modern history when he assassinated Archduke Franz Ferdinand, heir to the Austro-Hungarian Empire,
on June 28 1914. So monumental were the events of the conflict triggered by the assassination that the story of Princip has been overshadowed by the weight of history, his motivations misunderstood, his intentions traduced. The Trigger fills in the most complete picture yet of the 19-year-old who changed the world, grounding his life story in the same valleys and mountains of Bosnia where the war of 1992-1995 (covered by Butcher as a war reporter) revealed the ongoing danger of militant nationalism. Part whodunit, part travelogue, part history, The Trigger uses Tim Butcher’s journey in the footsteps of Princip to tell a gripping, richly layered tale of cause and effect that will be published in 2014 for the centenary of the First World War.


Tim Butcher is an award-winning journalist, broadcaster and author. He is the author of Blood River: A Journey to Africa’s Broken Heart (2007), shortlisted for prizes including the Samuel Johnson Prize, and Chasing the Devil: The Search for Africa’s Fighting Spirit (2010).