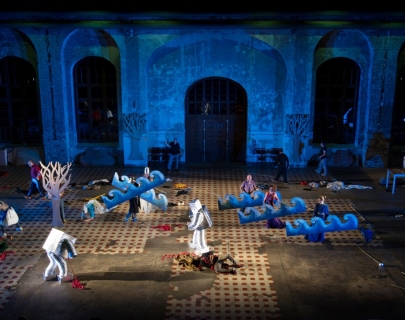 In The Last Adventures, Forced Entertainment collaborate with Lebanese sound artist Tarek Atoui to create a compelling performance on an epic scale. Sounds swarm and storm in the air as performers in homemade costumes create a pageant of giant sea monsters, ghosts, fighting kings, marching robots and dancing trees. Before our eyes Forced Entertainment transform a haunted forest into a sky of portentous clouds, or the aftermath of a terrible war. Here and there recognisable characters surface from the chaos in strange juxtapositions, emerging onstage from the ruins of familiar stories, only to disappear in the very next moment.

An allocation of tickets for the Friday 3 October, 7.30pm performance are available as part of Fierce Festival’s Weekend 1 Pass, which can be purchased by clicking here

Forced Entertainment are a group of 6 artists who have been making performance since 1984 – questioning, pushing and breaking theatre to see what can be built from the wreckage. Based in Sheffield, UK, their work has been seen all over the world.