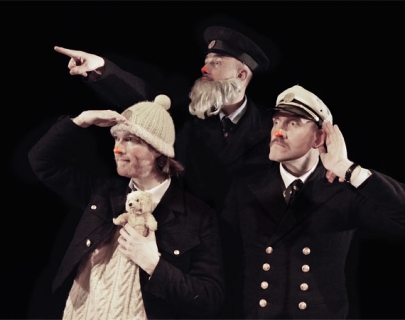 Welcome to Flounder Rock Lighthouse, where three men live and work, battling the elements and the long lonely night watches, with only each other and the seagulls for company.

Wise Old Tom and uptight middleman Dick are trying to teach Young ‘Arry the ropes on his first tour of service. When the storm of the century threatens, will disaster strike? Will the lamp shine true? Will the biscuits run out? Watch on, dear audience

WinterWalker presents Three Keepers; a play without words for everyone aged 8 and over. A tale of life on a rock lighthouse, told through an inventive blend of physical theatre, dance and comedy, inspired by the silent film clowning of Buster Keaton and Charlie Chaplin.

After the Sunday show and the Monday morning show, stay with the actors and give them suggestions for a FREE 40 minute physical comedy improvisation session. You might even end up on stage!

On Mon 16 Feb 12.45pm, join Kitty Winter (co-director of WinterWalker) in the Helen Martin Studio for comedy character creation in a one hour family workshop where you’ll create a short scene for sharing and get some yummy cake to boost your energy before the show at 2.30pm.