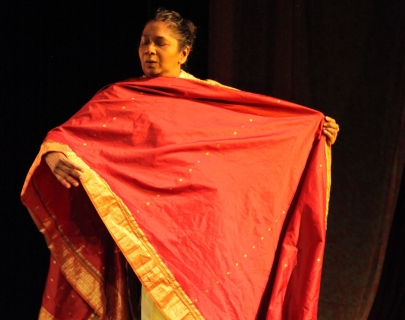 Six yards of cloth, wound round tight
Or draped seductively
Or practically, for breastfeeding
Or pulled between thighs to walk like a man
Or wildly thrown together, with Doc Martin boots
A modest proposal or a political act or a defiant one

At turns funny and poignant, domestic and political, Whose sari Now? is a multifaceted show that looks at the sari from fresh and unexpected ways.

Rani Moorthy will play all the 5 characters in the play; from an old Asian woman whose saris are like her second skin, a young mother giving birth in a war zone wrapping her twin babies in her wedding sari, a Malaysian historian connects the sari with mythology, a transgender person reflects on his girlfriend’s sari obsession, a low caste weaver drapes the sari on a member of the audience who she is conditioned to believe is more worthy and a character who contemplates her relationship with the sari in her final hours.

Whose Sari Now? will have a rich and eclectic visual style, creating mood, context and by turns augmenting and challenging the action. The specially created music is drawn from a variety of influences including classical Indian Carnatic music, pop, hip-hop, Tamil rap, Malay instrumentation, western classical and contemporary music.