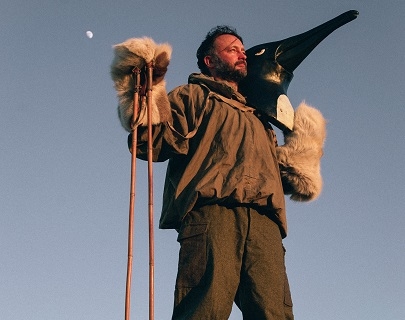 Handfuls of Night on the Erased Tapes label is the highly anticipated follow-up album to Penguin Cafe’s much lauded 2017 album The Imperfect Sea, which Penguin Cafe performed at Warwick Arts Centre in 2018.

Handfuls of Night started life after Greenpeace commissioned Arthur Jeffes to write four pieces of music in 2018, corresponding to four breeds of penguins to help raise awareness for the endangered Antarctic seas.

But the project’s origins reach further back, when Jeffes was asked in 2005 by the BBC to join an expedition re-creating Captain Robert Falcon Scott’s last Antarctic trip in 1911, using the same Edwardian equipment.

Inspired by the Antarctic landscape and our penguin friends who reside there, Handfuls of Night features a vivid series of panoramic sonic landscapes and a style which Jeffes terms ‘glacial minimalism’.

Following in Arthur’s father Simon Jeffes’ footsteps, and performing music from both the Penguin Cafe Orchestra repertoire alongside the new album, this talented array of musicians make use of a variety of instrumentation – gut-stringed violins, viola, cello, bass, percussion, upright and grand pianos, synthesiser, harmonium and more – to create their inimitable sound.

This event was previously due to take place on Fri 9 Oct 2020, but was rescheduled due to government guidance.