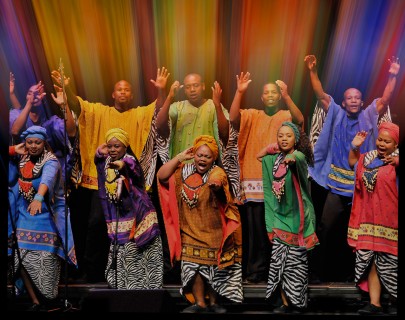 Over the last 10 years Soweto Gospel Choir has brought joy into the lives of audiences all over the world. They have collaborated, recorded and performed with artists including Bono and U2, Aretha Franklin, Stevie Wonder, Robert Plant, Celine Dion, Red Hot Chilli Peppers, Peter Gabriel, Josh Groban as well as Andrew Rieu. They have performed in front of President Bill Clinton, Oprah Winfrey and of course their spiritual fathers, Nelson Mandela and Archbishop Desmond Tutu. And now they are coming to Warwick Arts Centre for one night only. Be uplifted by this joyful spectacular of song and dance – book today.

Soweto Gospel Choir are heralded around the world as one of the great vocal ensembles. Along the way they have won 2 Grammys, an Emmy and an Oscar nomination and have just recorded their 6th album.

Soweto Gospel Choir is wonderful! You have never seen or heard such infectious joy – guaranteed!!

Brian May of Queen

Sheer jubilation … earthy and unrestrained … The Rhythm of Life

There is simply no flaw here

These absolutely thrilling singers need nothing but their voices to make dazzling music.