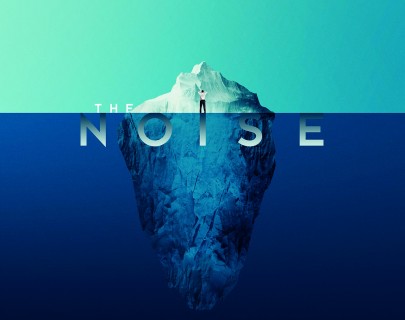 A remote island in the Southern Ocean.
A noise that never stops.
A massive iceberg in the harbour.
A body in the water.
And an 18-year girl who is the only one asking any questions.

The island of Whitley (nr Antarctica, population 600) is home to The Noise – a weird, ever changing, always present sound that makes the islanders… different. Nobody knows what causes it and, because it’s all they’ve ever known, everyone has stopped asking. Only 18 year old Charlie and her best friend Harry, a local scientist, are still looking for the answers.

When a massive iceberg drifts impossibly into the harbour one night and a body washes up soon after, Charlie finds there is no-one left she can trust and sets out on her own to uncover the truth and the source of The Noise.

An edge of the seat, sci-conspiracy thriller that is a sonic and visual feast.

Featuring original music by electronic musician Minotaur Shock and sound design by Gareth Fry (who created the soundscape for the Opening Ceremony of the London 2012 Olympic Games).

The excellent Unlimited Theatre… a company that has always combined infinite thoughtfulness with theatrical flair.