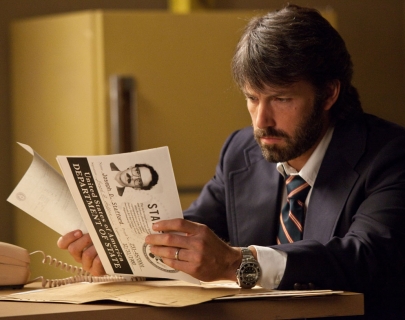 To coincide with real-life Argo inspiration Tony Mendez’s appearance at the University of Warwick Book Festival, we’ll be hosting a special screening of the Oscar-winning film Argo, which will be preceded by a Q&A with the man himself. There are a limited number of FREE tickets available to anyone who has booked a ticket for any BookFest2014 event. To avail of this offer you must call 024 7652 4524 or visit Box Office in person to be assigned a FREE ticket.

Argo, the film that swept the board during 2013’s awards season and marked Ben Affleck as a key Hollywood player, is set during the Iranian revolution in 1979 and based on a true story.

Part espionage thriller, part entertaining movie-business satire, it tells the tale of a CIA operative Tony Mendez (Affleck) who attempts to rescue six American diplomats from Iran with a plan so absurd it might actually work. Concocting a fake sci-fi movie “Argo”, complete with script and director, he attempts to pass off the diplomats as a Canadian film crew in order to get them out of the country.