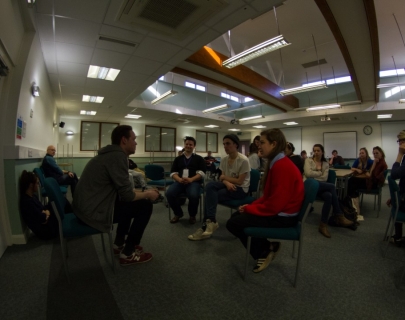 Come and join us in an exploration of nothing; from stalkers to cupcakes, pooing to daydreaming, as we ask what constitutes nothing? And what constitutes something? This innovative production won four awards at this year’s National Student Drama Festival.

Nothing is much more than a series of monologues. It is about – among other things – cupcakes, action films, crap television, s***ting, sex, buses and stalking. It is about alienation and being young.

Initially written as eight monologues by Lulu Raczka (winner of the Sunday Times Young Playwriting Award), Nothing asks questions about the nature of theatre itself as performers improvise a new cut with every performance, each starting the show without knowing which particular monologue they will be performing on that occasion. Nothing is thus a game for both performer and audience, but it is also a serious interrogation of the structures within which we live.

Barrel Organ is a young company fresh out of the University of Warwick. Nothing opened with short runs in Leamington and London before heading to the National Student Drama Festival in April 2014 where it won four awards, including the Buzz Goodbody Student Director Award and the Award for Creative Risk.

“A snapshot of a generation who feels that the future has very little to offer them, and who are appalled and fascinated by the violence they encounter in everyday life”.
★★★★ Lyn Gardner, the Guardian. Read the review.

“Not since 2010 – Anya Reiss’s Spur of the Moment at the Royal Court, London – has a first-time play felt so certain in both voice and intent…”
★★★★ Matt Trueman, Financial Times. Read the review.

“A fiercely confrontational and intelligent piece, with a disarming truthfulness about the way we live today”.
★★★★ Time Out. Read the review.

“Deceptively simple, this sequence of raw and disturbing monologues disguises an elaborate set of rules ensuring no performance is ever the same”
Robert Hewison, The Sunday Times

Barrel Organ are a young company committed to creating politically and theatrically conscious work through a process which is inspired by the ethos of ensemble and collaboration. We believe that we can offer new work to new people in new ways, and that in doing so, we may be able to change the world in which we live.