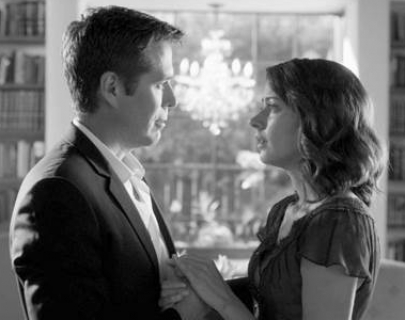 Shot in black-and-white in his home during a break in the production of Avengers Assemble and with a cast familiar from his TV shows including Buffy and Angel, against all odds Joss Whedon’s Much Ado About Nothing, is arguably the freshest and most delightful film ever made of a Shakespearean comedy.

The University of Warwick’s Professor Tony Howard considers how this play’s “merry war” between Beatrice and Benedick laid the foundations for Hollywood’s screwball comedies of the 1930s and ‘40s, featuring Katherine Hepburn, Cary Grant et al.

How do you film a Shakespearean comedy?

Kenneth Branagh and Joss Whedon both looked at Much Ado About Nothing, and came up with very different answers. Branagh drenched the play in romantic music and high-spirited spectacle, with a photogenic cast galloping, laughing and dancing over sun-kissed Tuscan hills.

Joss Whedon has made it a modern-dress home movie and filmed it in black-and-white. It’s a masterclass in how to film Shakespeare on a low budget.

Much Ado, with its love-hate battle of wits between Beatrice and Benedick, sets the pattern for centuries of plays pitting mismatched lovers against each other – from Restoration comedy to Wilde and Shaw and Coward. And then when film came along, the ‘merry war’ of words provided the prototype for Hollywood’s great screwball comedies in the 1930s and ’40s. Katherine Hepburn, Spencer Tracey, Rosalind Russell, Cary Grant – they became Beatrice and Benedick’s sisters and brothers.

Whedon’s Much Ado recognises this connection, and brings classic film and TV techniques together to bring Shakespeare effortlessly alive – this Shakespeare on Screen event will ask how.