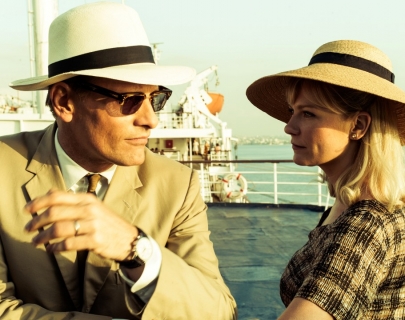 Based on the Patricia Highsmith novel of the same name, this tense thriller follows in the mould of a previous Highsmith adaptation The Talented Mr Ripley, which takes in a rich and beautiful American couple and glamorous international locations.

Viggo Mortensen is Chester MacFarland, a con-man holidaying in Greece with his wife Collete, played by Kirsten Dunst. While there, they meet American tour guide and scam-artist Rydal (Inside Llewyn Davis’ Oscar Isaac). When Chester asks Rydal to help him dispose of the body of a private detective who has come to investigate him, the trio become dangerously entangled as they attempt to flee the authorities.

“An elegantly pleasurable period thriller, a film of tidy precision and class.” ★★★★ The Telegraph

“(A) dark thriller which leaves you guessing until the end.” Evening Standard

Join us for a themed cocktail from our friends at Le Gusta before the screening on Fri 30 May 8.45pm as part of our Cocktail Fridays.