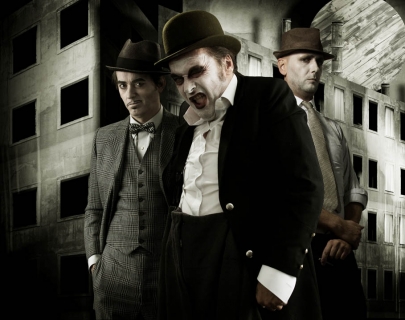 The Tiger Lillies’ genre-defying brand of other-worldly vocals and unnerving performance style have carved them a unique niche in the cabaret and music theatre scene. After a sell-out run of The Rime of the Ancient Mariner at the Southbank Centre, the cult creators of the award-winning Shockheaded Peter now stage another adaptation of a macabre classic.

The character of Lulu is one of the great creations of 20th Century fiction, and one of its most disturbing. Her unbridled sex appeal, her youth, and her self-destructiveness combine to make her dangerous, unpredictable and tragic. With the men (and the women) who circle her, Lulu’s journey from street prostitute to the toast of Society and back again, is told as a hypnotic and kaleidoscopic dance of death. Journey with her from Berlin to Paris and finally to the dark London streets of Jack The Ripper.

The band’s flamboyant live performance is enhanced by large-scale virtual sets that create an immersive and richly atmospheric environment. Across the performance, the ballad of Lulu unfolds as an uncompromising musical and visual melodrama.

Written by Martyn Jacques.
Directed and Designed by Mark Holthusen.
Performed by The Tiger Lillies and Laura Caldow
Based on Frank Wedekind’s plays, Earth Spirit (1895) and Pandora’s Box (1904)