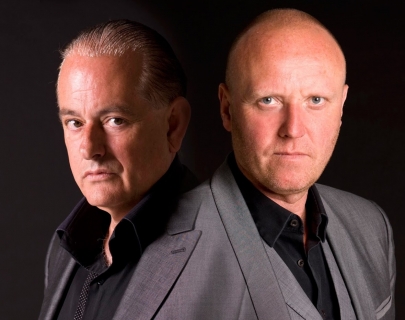 Originally a trio from Sheffield in the early 1980s, the band comprised Martyn Ware, Ian Craig Marsh (both on keyboards and previously with The Human League) and Glenn Gregory (vocals).

Their album, The Luxury Gap, was their pop masterpiece, the moment when everything just clicked into place to devastating effect. The bands favourite-ever song, Let Me Go, so nearly broke them into the UK Top 40. There would be no such disappointment with its follow up, Temptation. A duet between Glenn Gregory and Carol Kenyon, this song of lust reached Number 2 in the UK charts in May 1983.

The Luxury Gap has never been more relevant. Written during the height of Thatcherism by three Left-leaning young men against a backdrop of over 3 million unemployed the parallels with the Austerity Britain of today are obvious. Today with a Millionaire cabinet, bankers’ bonuses, yet with once again three million unemployed and doom and depression everywhere, Heaven 17’s sly, post-modern critique of modern society has never sounded so resonant, nor been so necessary.