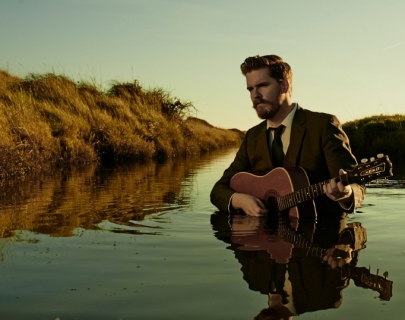 Due to the unforeseen extension of David Gray’s international tour, which John Smith is a core part of, John’s management has taken the reluctant decision to reschedule the autumn tour. His show at Warwick Arts Centre has been postponed from Sun 23 Nov 2014 to Thu 26 Feb 2015. Box Office will be contacting ticket holders to arrange transfer of tickets to the new date, or a full refund. The new date will go back on sale to the general public as soon as this process has been completed.

John Smith is the guitar man from Devon who has quietly become one of the most exciting voices on the new British folk scene.

John plays the steel-string acoustic guitar. Sometimes with a slide, sometimes on his lap, sometimes de-tuning the thing mid-song. He was named Young Acoustic Guitarist Of The Year in 2003 and hasn’t stopped to look back, unless it’s to pick up a banjo. His playing combined with his honey-on-gravel vocals have brought crowds to pin-drop silence and rapturous applause. His new album Great Lakes is out now.

“John Smith again demonstrates why he is the guitarists’ guitarist. His steel-strung acoustic playing adding a beguiling complexity to songs that possess a sharp communicative clarity and directness” Sunday Times

“A man with one of those rattling hearts. It’s a true heart. It’s a hurt heart” Daytrotter

“Songs that impress with the beauty of John’s guitar work and intertwined vocals. Staggeringly good” Acoustic