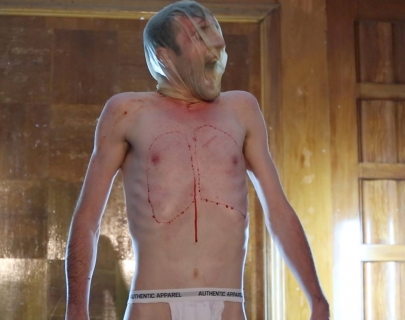 Martin O’Brien’s practice focuses on physical endurance and disgust in relation to the fact he suffers from cystic fibrosis.

Breathe for Me considers the nature of the regulated chronically ill body. Martin O’Brien re-embodies and takes pleasure in the excessive performance of an already embodied lived experience. Illness is revealed through the body in extremis. This body which is turning against itself relentlessly endures as a form of resistance to illness. Martin is beaten, bruised, cut, and penetrated, exhausted, suffocated, examined and treated in a regime of sufferance in order to survive.

Martin has performed his work throughout the UK, Europe and the US. He was artist in residence at ONE National Gay and Lesbian Archives (Los Angeles) in 2015 and an Arts Admin Bursary artist (2014-2015). His work has been funded and commissioned by Arts Council England, British Council, and the Live Art Development Agency. His work has been written about in several books and journals and 2016 will see the release of his first artist book Cough It Up: Writings on the Art of Martin O’Brien. He is a lecturer at Queen Mary, University of London.

Contains nudity and content that some may find disturbing