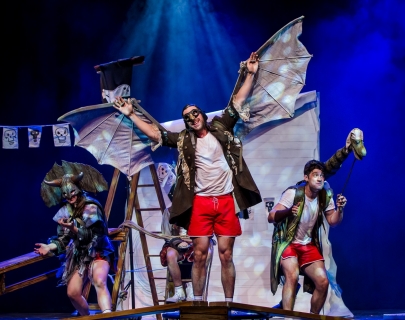 Join Flinn in this action-packed adventure as he attempts to rescue his kidnapped friends who have been forced to hunt for the Magic Cutlass by his nemesis the tyrannical Mr T-Rex!

‘Les Petits has executed this sequel to their original adaptation with lively invention.’ ★★★★ The List

‘A fun treat for all young aspiring pirates and dinosaur fans, complete with classic antics and catchy songs which will leave you victorious and tapping your foot!’ Theatre and Tea

‘With plenty of laughs for the adults as well, this is wholesome family entertainment at its best.’ ★★★★Edfringe Review
**
**
‘Well acted and entertainingly staged mini epic by Les Petits Theatre.’ ★★★★The Stage

Please note: All children, including babes-in-arms, must have a ticket for admission. For performances not directly aimed at children under 2, admission is free with a valid ticket. If you would like to book a free babes-in-arms ticket, please note that these are limited availability so please contact the Box Office Team on 024 7652 4524 prior to booking.