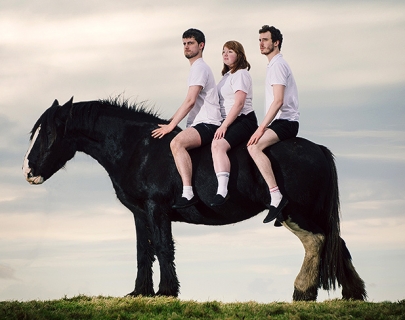 As seen on Inside No.9 (BBC2) and as heard on BBC Radio 4’s Sketchorama.

The award-winning Gein’s Family Giftshop are hitting the road for their first ever UK tour. Following huge success at the Edinburgh Festival Fringe, their own BBC Radio series, and a Christmas show on Sky, they’re coming to a town near you. Don’t be scared.

Feast your eyes upon 60 minutes of sketches that aren’t for everyone, but might just be for you.

Fast paced and irreverent, Gein’s Family Giftshop have an enviable gag rate and a stage presence that more established groups can only dream of. Their unique brand of gag heavy writing and gleeful live performances have given the group a core of loyal followers, creating original and engaging sketch comedy that never forgets the punchline.

Absurd in tone this quartet marry the tragic with the hilarious, as they apply their warped world vision to the hilarious subject matter of abject misery, and human tragedy.

“The hottest comedy ticket in Edinburgh… going from being largely unknown to feted by the famous…word-of-mouth has lead to five-star reviews and a clutch of fans, from Daniel Kitson to Tim Key.” The Sunday Times