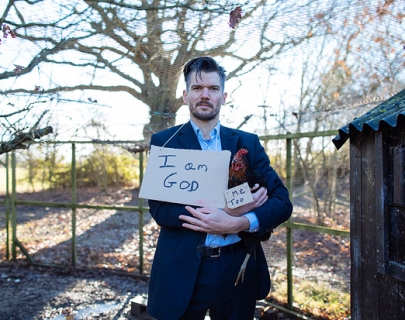 Paradise Lost (lies unopened beside me) is a one man version of Milton’s epic poem Paradise Lost, conceived, directed and performed by Ben Duke for Lost Dog.

The show brings highlights of this well known but often forgotten story beginning with Lucifer’s rebellion and ending with Adam and Eve’s expulsion from the garden of Eden. A single man plays all the characters, creates all the scenes and, despite his best efforts, falls a little short of perfection. A show for anyone who has created anything (child, garden, paper aeroplane) and then watched it spiral out of control.

The work premiered in May 2015 at Battersea Arts Centre, London as part of A Nation’s Theatre and went on to run at Summerhall as part the Edinburgh Fringe Festival in August 2015 where it received high critical acclaim and was shortlisted for a Total Theatre Award in the Innovation, Experimentation and Playing with Form category.

“The comedy is divine, but the images of love and loss are achingly human” ★★★★★ The Independent