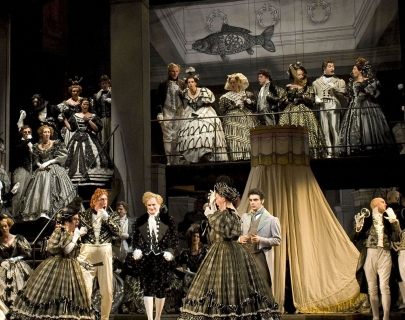 At the centre of these extraordinary tales of clockwork dolls, magical glasses, ghostly voices and sensual courtesans is the vivid imagination of the drunken Romantic poet Hoffmann. Charismatic young tenor Vittorio Grigolo is Hoffmann – compelled to tell the story of his lovers who, he believes, have all been stolen by a succession of arch villains. Superb baritone Thomas Hampson performs all four villains.

The music includes the famous ‘Barcarolle’ and the stunning showpiece numbers are perfect vehicles for the vocal virtuosity of Sofia Fomina as the clockwork doll Olympia, Christine Rice as the courtesan Giulietta, and Sonya Yoncheva as Hoffmann’s last love Antonia.