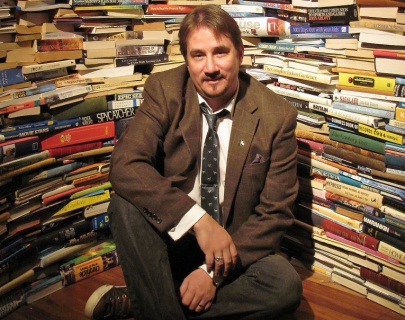 Do you have an idea for a Comic Book or Graphic Novel, but you’ve never ‘given it a go’? Do you think your novel or film screenplay could be adapted into a graphic novel easily? Does your project have a Transmedia market that could include some kind of digital comic or webcomic?

Warwick Arts Centre present a brand new two-day course to help you succeed in all of the above! #1 New York Times Bestselling List and Eagle Award winning comic book writer and screenwriter Tony Lee (Doctor Who, Superboy, Spider Man, X-Men, 2000AD, Battlestar Galactica) takes you through the steps to turn your idea into a comic book or graphic novel, and shows you what you need to do to get yourself published.
This is your chance to learn from a master on how to build a new career in writing for comic books and graphic novel script writing.

With over twenty eight years experience as a professional writer, and over a decade’s worth of experience as a comics creator for both UK and US publishers, Tony’s worked in all areas of the industry. And with a new career emerging in film and TV screenwriting in both the UK and the US, Tony’s also the screenwriter of the movie The Mild Bunch, with Colin Baker, Vicki Michelle and Frazer Hines attached to star in, The Nest, a US television show co-created with Supernatural and Stargate Universe actress Alaina Huffman, 52 Pickup for Richwater FIlms and Cartel, starring Craig Fairbrass.

Day One:
• Why scripting comics isn’t ‘easy’ – and why a comic of your screenplay won’t sell your screenplay
• Comparison: Screenplay / Novel / Script, using an example
• Visual Thinking and why it’s great – the original spark of an idea
• The ‘Coulda, Shoulda, Woulda’ moment
• Who? What? Why? When? Where?
• Why ‘working backwards’ helps you move forwards
• Storytelling: The characters – what do they want? Why do we care?
• Storytelling: The conflict – protagonists and antagonists
• Storytelling: Keeping the reader invested over time
• Describing your characters – how will an artist know?

• Comparison: Anthology / One-shot / Mini Series / Ongoing / Graphic Novel / Web Series
• The High Concept / Elevator Pitch
• The restraints of a comic script (length, page turn etc)
• The importance of the full synopsis
• Chekov’s mantelpiece rule – and why it’s vital to comics
• The rising act structure
• Subplots and supporting characters
• Is your story all it can be – the joys of hindsight
• Devil’s Advocate – does your idea stand up to scrutiny?

Day Two:
• The full synopsis – the ‘treatment’ for comics
• Breaking it down: Scene by scene
• Breaking it down: Page by page
• Comparison: Full Script / Plot-Art-Dialogue (‘Marvel’ style)
• Know your comic terms – the language of the comic script
• Types of panel / how many to a page
• Dialogue: Why a writer should always letter at least one page.
• Comparison: Screenplay dialogue / Comic dialogue
• Action Verses Spoken Word

• Adaptations of existing material
• Licensed Properties and Preexisting Characters
• Self Publishing: finding an artist.
• Self Publishing: Percentage or Page Rate
• Getting known: Webcomic / Vanity Press / Small Press
• Conventions / Networking – the dos and don’ts
• Submitting to the established comic book companies
• Know your target – does your story match their style?
• How much does an agent help a comic creator
• Selling yourself rather than your story
• Comic Pitch Thunderdome – live pitching session!