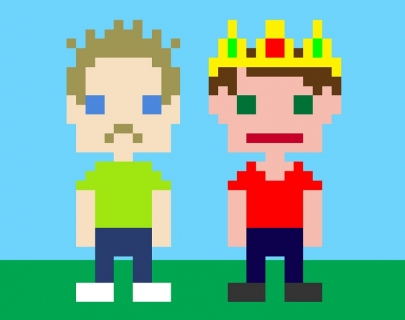 WiFi Wars is a live comedy game show where you play along!

Login with your smartphone or tablet (make sure you’ve got plenty of battery!) and compete in a range of games, quizzes and challenges to win the show, and prizes!

You may have spotted them in Time Out (Critic’s Choice), Metro (Top Ten London Geek Nights Out), The Guardian (Not To Be Missed) and on BBC Radio 4 Extra. They also had their own stage at Eurogamer’s EGX, welcoming over 80,000 people to the event over its four day run at Earls’ Court.

The technology used in the show was originally created by the boys for the live incarnation of Go 8-Bit, and will feature in the new TV adaptation of the show. Dara O’Briain said: ‘In video games veritas, my friends. This show is a raucous, back-biting, properly competitive celebration of the world’s favourite pastime. Let’s Go 8 Bit!’

Sadly, at the moment, Windows phones are not compatible with WiFi Wars. We’re attempting to resolve this. All Android and Apple/iOS devices should work fine with the show.

“Not to be missed” The Guardian