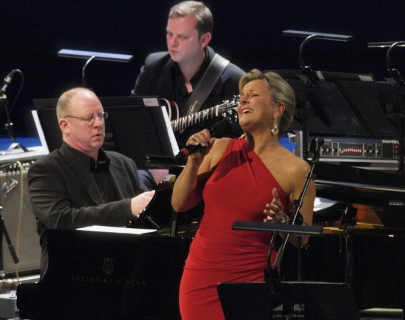 The internationally acclaimed BBC Big Band and conductor Barry Forgie, are joined by multi award-winning vocalist and BBC Radio 3 presenter, Claire Martin, for a very special concert celebrating the centenary of the birth of ‘The First Lady of Song’, Ella Fitzgerald.

Through a diverse repertoire arranged and curated by the BBC Big Band and Claire Martin, the concert celebrates the music of the twentieth century’s most iconic vocalists, and whose legacy and influence defines a classic era of jazz singing.

Featuring classic versions of Ella’s most famous songs, including ‘That Old Black Magic’, ‘Too Darn Hot’ and ‘Fascinating Rhythm’, alongside a selection of music from the many bands and orchestras that she worked with, from Chick Webb through to Count Basie – this an evening of world-class music which is not to be missed.

Praise for The BBC Big Band:

“They brilliantly continue the tradition of Big Band music. As such they are important, as well as marvellous!” Michael Parkinson