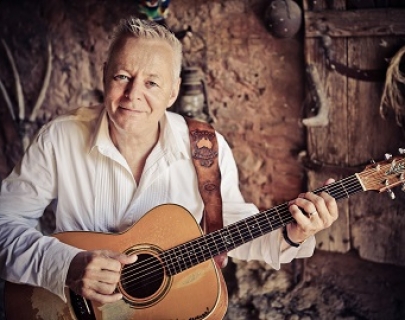 Tommy Emmanuel has achieved enough musical milestones to satisfy several lifetimes. Or at least they would if he was the kind of artist who was ever satisfied, but Tommy has always hungered for what’s next. When you’re widely acknowledged as the international master of the solo acoustic guitar, what’s next is Accomplice One, an album of collaborations with some of the finest singers, songwriters and guitarists alive today.

Influenced by the Merle Travis/Chet Atkins fingerstyle of guitar picking, Tommy developed a style of solo guitar playing that encompasses the range of a whole band – covering drums, bass, rhythm and lead guitar and a vocal melody simultaneously. No loop pedals, no overdubs, just one man and ten fingers. While some artists take ten-piece bands on the road and still fill out the sound with backing tracks, Tommy builds a complete sonic world entirely on his own.

“If you like guitar playing, it simply doesn’t get any better than Tommy.” Jason Isbell