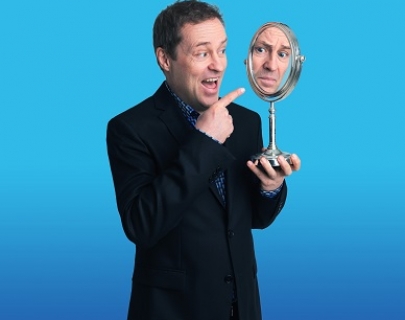 Where Ardal O’Hanlon comes from there is nothing worse than showing off. Yet he is a professional show-off. Why does he do it?

Well. Just when he thought he’d made sense of the world, when he thought he’d found wisdom, when he’d finally found a hat that that fits and learned how to make decent cocktails and to relax for the first time in his life; just when he was about to quit airing his dirty linen in public and stop showing off. The world shifted. Dramatically. The world fell of its axis. And is adrift in the universe. And needs saving.

In an age of raging populism, identity politics, the end of truth, the collapsing middle ground, and peak avocado, and terrified of being on the wrong side of history, and desperate to prove that his gender, race, age and class don’t necessarily define him as a person, Ardal is forced to saddle his high horse again and ride fearlessly into the culture wars (with a white hankie in his pocket, just in case), comedy as ever being the best emergency response mechanism to extreme events there is.

Ardal O’Hanlon, star of TV shows such as Death in Paradise (BBC) and Father Ted (Ch 4) and My Hero (BBC), continues to tour his acclaimed stand-up show worldwide. Because he loves it. And it’s a compulsion. And the world is a funny place.