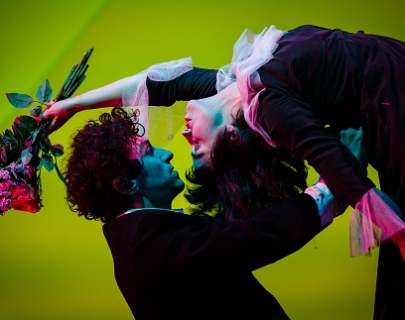 Partners in life and on canvas, Marc and Bella Chagall are immortalised as the picture of romance. But whilst on canvas they flew, in life, they walked through some of the most devastating times in history.

Daniel Jamieson’s The Flying Lovers of Vitebsk traces this young couple as they navigate the Pogroms, the Russian Revolution, and each other.

Emma Rice’s sumptuous and physical production is drawn in a theatrical language as fluid as Chagall’s paintings and woven throughout with music and dance inspired by Russian Jewish traditions.

After the heady success of the live broadcasts of Romantics Anonymous, Wise Children have teamed up with their friends at Kneehigh and Bristol Old Vic to bring you Kneehigh’s award-winning production of The Flying Lovers Of Vitebsk directed by Emma Rice, LIVE ON STAGE at the Bristol Old Vic!

Wise Children TV will bring this visually stunning, intimate and emotional production live into your home – each night will be a truly one-off experience! The company have been isolating together in one large bubble for the last two weeks so that the show can be performed in its original form. With no social distancing, you can expect something as magical as one of Marc Chagall’s paintings, with singing, dancing and perhaps even a large blue fish!

The “Virtual” doors will be open from 7pm, and the show will start at 7.30pm with an introduction from Emma Rice herself. If you watched Romantics Anonymous, you’ll already know that this is not a pre-recorded event!

We know a live-streamed show isn’t the same as actually going to the theatre and we also understand that watching things online can be hard work. The team have done everything they can to make sure the live broadcasts are of the highest quality, that they’re as easy to watch as possible, and that buying a ticket is simple. The production will be broadcast in full High Definition (as long as your internet connection can cope with it) and it’s also broadcast in Stereo.

The Flying Lovers of Vitebsk will also be available on-demand Fri 11 – Fri 18 Dec, including Captioned and Audio Described recordings.

NB Ticket sales go through an external party website and are subject to separate terms and conditions.