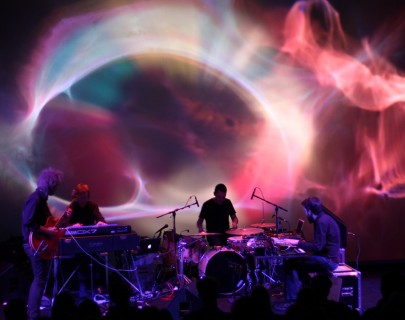 New York’s legendary Joshua Light Show is noted for creating the hallucinatory visuals behind the psychedelic mythic rock acts of the late 1960s including The Doors, The Jimi Hendrix Experience, The Grateful Dead and Janis Joplin.

This new performance combines the show’s classic analog effects – including the ‘liquidlight’ from melted wax, for which it is best known – with contemporary digital approaches. This is one of only three performances in the UK in a rare European outing.

Joshua Light Show will be accompanied by rising electronica star Nicolas Jaar who fuses minimal techno beats, deep house, off-kilter jazz-funk rhythms into symphonic dreamscapes. His debut album Space Is Only Noise has become one of the most successful debuts of recent times garnering praise from the likes of The Guardian (“One feels drawn into a fully formed, self-contained world of his making”) and Dazed & Confused (“Nicolas Jaar has achieved something that few electronic musicians have achieved before – bringing geeky techno fiends, jazz lovers and chav ravers into an unholy union”).