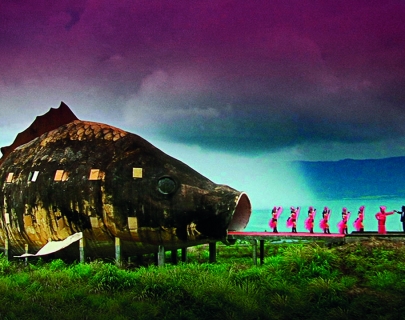 In the aftermath of a failed coup in Indonesia in the mid-60s, more than a million people were murdered in a bloody cull.

Director Joshua Oppenheimer interviews those who took part in the mass murders and persecutions, many of whom not only escaped convictions but are celebrated as heroes. When asked to re-enact their horrific past, the killers revel in putting on cheap make up and dressing up to play both murderer and victim. But even in this most dark side of the human condition, there is a semblance of humanity; as they watch the footage of the re-enactment, they begin to realise the impact of their actions

Executively produced by renowned documentary filmmakers Werner Herzog and Errol Morris, The Act of Killing, like all the best documentaries, is a disturbing but essential film.

“A masterpiece about propaganda, cinema and vanity as instruments of power and terror.” Roger Ebert

Please note the change in start time from the printed Nov-Dec Cinema Diary.