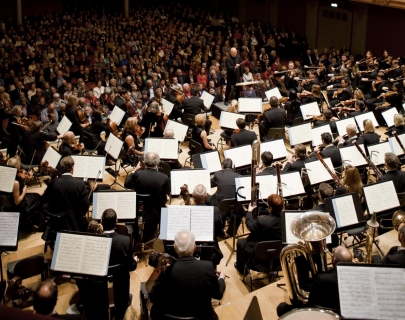 You’re standing on the Golden Gate Bridge when a huge supertanker suddenly rears up from the water and shoots into the air like a rocket. Wagner’s Parsifal plays softly – but just keeps turning into Mahler. And against a starry sky, a medieval mystic chatters away to a Californian baby. Those are the visions that inspired *John Adams*’ Harmonielehre. It’s been called a homage to German romanticism; it’s been called the greatest American symphony of modern times. But whatever you do, don’t call it ‘minimalist’ – because there’s nothing small about this huge, vibrantly colourful and utterly unique masterpiece from one of the world’s foremost living composers.

Conductor Dennis Russell Davies has a unique personal relationship with these works – and Philip Glass himself acknowledges Davies as one of his greatest living interpreters. Nothing matches the experience of hearing this hugely accessible music performed live, and you’ll never hear it done better.