Customer Update: Following government advice, Warwick Arts Centre is temporarily ceasing its building-based activities, but we WILL be returning after this interval. Our programmed events until Tue 21 Apr are not going ahead. We will update this message, the News pages of the website, and our social media channels as the situation develops. Read more here. 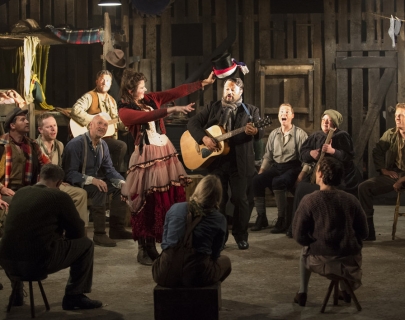 ETO is also performing The Magic Flute on Fri 9 & Sat 10 May. Buy tickets for both ETO operas at the same time and get 15% off!

Charming and dreamlike, Paul Bunyan is often described as part-opera, part-musical, with elements of blues, folk songs and hymns making it a very accessible introduction to the music of Benjamin Britten. A humorous collaboration with poet W.H. Auden, it is a witty, imagery-rich evening set in a lumberjack’s camp, telling a story of the American frontier.

The opera is populated by an exotic array of characters, including giants, singing geese, dancing Swedes, bad cooks and a smooth chef.

A witty and irreverent response to the American Dream, English Touring Opera’s production forms part of the Britten 100 centenary celebrations.

“Flawless from start to finish” ★★★★★ Independent

“Could give any Broadway hit a run for its money” ★★★★ Telegraph

Winner of the 2014 Olivier Award for Outstanding Achievement in Opera.

Click below to hear some of the songs from Paul Bunyan: