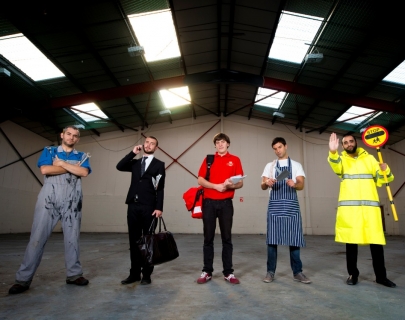 Led Bib, have been described as “a lean, mean, improv-rocking jazz machine” (Time Out). The five piece blend groove, improvisation, thrash and everything in-between and their live shows are renowned for carrying along their audiences with an undeniable energy and pulse unusual for a jazz group and more akin to their avant rock peers.

Their 4th album Sensible Shoes saw them experience widespread acclaim following their nomination as an Album of the Year in the Barclaycard Mercury Prize. Led Bib continue to appeal to all fans of good music – it’s the reason that drum and bass heads, jazz aficionados and folk and pop fans are dotted across their audiences. They have drawn references from across the musical spectrum from Captain Beefheart and John Zorn to Pink Floyd and Miles Davis.

“Part free improv, part art-rock, the band’s uncompromising formula puts them in the vanguard of the new school of British jazz” The Sunday Times

“Quite possibly they’re the missing link between jazz, prog and experimental rock, which puts them in a field of one” The Scotsman