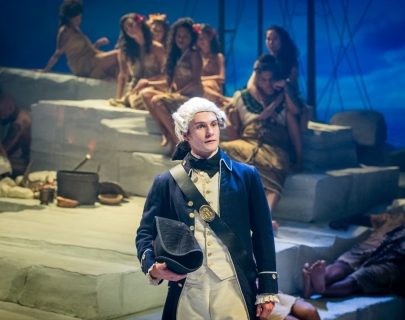 1789 was the year of the French Revolution, and also of the infamous mutiny on The Bounty. Rebellion and new ideas of democracy were in the air.

After overthrowing Captain Bligh, Fletcher Christian drops anchor at the remote island of Pitcairn in the southern Pacific, so to establish a society of equals with his fellow sailors and their Tahitian followers. But the settlers are loath to relinquish their privileges and vices, and the Tahitians dream of home.

With salty humour and growing horror, Richard Bean charts the colony’s descent from a new Eden to brutal dystopia. Richard Bean’s plays include the National Theatre, West End and Broadway hit One Man, Two Guvnors; The Heretic (Royal Court); and the forthcoming West End musical Made In Dagenham.

“Ingenious… A pleasure to watch. Tim Shortall’s design evokes the ruged grandeur of Pitcairn and Orian Michaeli’s choreography is spectacular. The cast is also highly impressive.” The Guardian

“Engagingly ambitious… a sense of scope that ensures it is never less than interesting. A fine cast.” The Times

The performance on Fri 24 Oct will be a STAGETEXT captioned performance. Captioning converts the spoken word into text that provides people with hearing loss access to live performance. In captioning, the words appear on a screen at the same time as they are sung or spoken. Captions also include sound effects and offstage noises. For more information visit www.stagetext.org