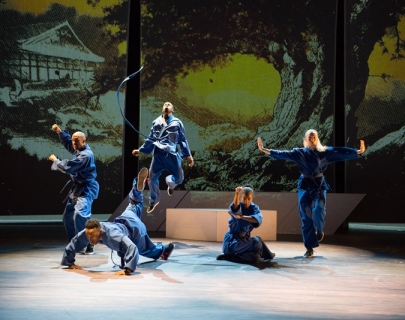 Five young troublemakers are drawn into a power struggle that has divided a secret group of warriors. Given a chance to redeem themselves in the ensuing battle to restore peace, their action-packed adventure becomes a celebration of camaraderie and the triumph of the human spirit.

Set in modern Tokyo, The Five & the Prophecy of Prana sees dazzling visuals frame a dynamic fusion of hip-hop and martial arts in an explosive tribute to manga – Japan’s popular graphic novel form.

“A highly diverting achievement with, there is little doubt a sequel already in the works” ★★★★ The Times

“Kenrick ‘H2O’ Sandy’s choreography… flows like water, one minute silky smooth, the next fast and furious, b-boying, tutting and krumping, and requires little narrative, but narrative there is.” British Theatre Guide

“I watched your performance with my two girls. I knew I would enjoy the show but it far surpassed any expectations that I had. I genuinely believe that your production should be a long running West End Production. It was so clever – a precision execution. Well done to the whole production team. I look forward to watching you progress and soar!”
Audience comment, Nottingham, October 2014

“I’ve never seen anything like it. I thought it was going to be good, but not that good!” I had an idea my daughter would be blown away by the imaginative fusion of martial arts-influenced dance, hip-hop, and manga-inspired visuals on display in this performance at the Dome, but I I’ve never seen such a flush of all-out artistic enjoyment from her as this … We both could have watched it all night.”
Audience comment, Brighton, October 2014