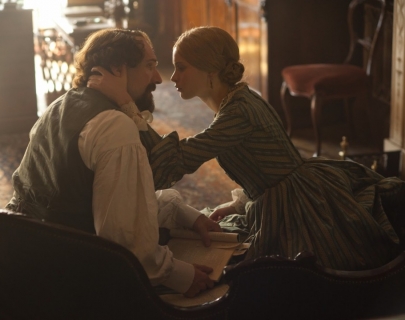 Ralph Fiennes’ directorial follow up to 2011’s Coriolanus explores the little-known relationship between the young actress Nelly Ternan and Charles Dickens. From their first meeting during the first staging of Wilkie Collins’ (Tom Hollander) The Frozen Deep, the film follows Nelly and Dickens as they embark on a reticent but inevitable love affair.

Alongside strong lead performances from Ralph Fiennes and Felicity Jones is a terrific supporting cast, including Joanna Scanlan as Catherine Dickens and Kristin Scott Thomas as Mrs Ternan. With a script by Abi Morgan (Shame, BBC’s The Hour), this is an accomplished and involving period drama.

“Fluid, handsome and confidently contained.” ★★★★ The Telegraph
“This is an engrossing drama, with excellent performances.” ★★★★ The Guardian
“An enthralling and beautifully performed period drama.” Screen International

Please note: The screening on Mon 24 Feb 6pm is an English Subtitled Screening.

There will be a post-screening discussion on Wed 26 Feb (6pm screening), led by Film Studies teacher Julia Condon Jones.